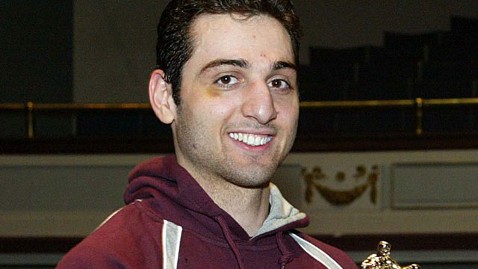 The ex-girlfriend of one of the Boston bombers has revealed that he tried to turn her against the U.S. and beat her if she wore Western clothing.

Nadine Ascencao says that over the course of her relationship with Tamerlan Tsarnaev, he was transformed from a fun-loving student into an Islamic extremist who shunned American life.

The 24-year-old lost her virginity to the Chechen immigrant and said she was besotted with him – but now she admits she had a ‘lucky escape’.

One minute he was a Moderate Muslim, the next he was an Extremist.

Ms Ascencao told The Sun: ‘One minute he’s this funny, normal guy who liked boxing and having fun, the next he is praying four times a day, watching Islamic videos and talking insane nonsense.

‘He became extremely religious and tried to brainwash me to follow Islam.

Tamerlan said I couldn’t be with him unless I became a Muslim. He wanted me to hate America like he did.’

Tsarnaev apparently stopped her from listening to pop music or watching television, and tried to control who she spent time with.

And when she wore Western clothing, he would fly into a rage and even attack her, she added.

‘He hated my tight trousers and made me wear long skirts,’ she told The Sun.

‘Towards the end I was wearing a hijab. He once ripped a pair of my jeans and hit me in the face with them.’

The pair’s relationship seems to have hit the rocks after Tsarnaev started seeing Katherine Russell after meeting her at a nightclub.

He met his next girlfriend at a nightclub. He must be a Moderate Muslim.
Posted by Pastorius at 3:55:00 pm

With all of these people coming out and saying how extreme he had become, how did the FBI miss this?

Who in the hell did the FBI actually talk to?

Or did they just call this dude up one day, ask him if he was a radical muslim planning on bombing America and when he said no, they hung up and closed the file.

You don't get it. He went out with non-Muslim girls he met at Nightclubs. That does not fit the FBI template for an Extremist.

Oh yeah that's right. That was after the FBI was forced to purge the truth about Islam.

Of course in the end the super-whore for Islam (just using their tactics against them) Russell won the competition so much so that she even tipped the terrorists off once the FBI released their photos on TV, which is what, the investigators believe, may have set some things in motion like the murder of the MIT police officer.

Consummate failure of those sworn to keep America safe.