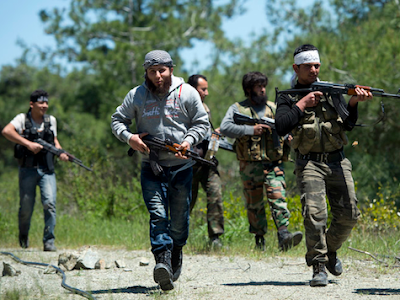 
With America battling the threat of Islamist terrorism from within, Europe is experiencing a dangerous phenomenon of its own: exporting of Islamism from Europe to the Middle East. According to the Associated Press, European mayors are now attempting to limit the travel of their citizens to Syria to fight “holy war” against the Assad regime in Syria. The AP reports: “Through much of western Europe, scores of Islamic youths have heeded the call to take up arms for a cause that is only a few hours away by plane. The phenomenon has alarmed authorities amid signs that the insurgency is becoming increasingly radicalized, with strong infiltration by al-Qaida."

The lack of integration of many young Muslims into Western countries has created the threat of domestic-based terrorism inside Europe. Now, that terrorism may be exported elsewhere. The United States has already dealt with American immigrants fighting on behalf of Al-Qaeda in Somalia. For years, the FBI has been trying to unlock the secrets of what ABC News describes as “a recruiting pipeline from the Twin Cities, which boast large Somali immigrant problems, to Somalia.” Similar phenomena have been described with regard to terrorists originating in Western countries traveling to Iraq and Afghanistan, as well.
In order to prevent the same sorts of activity in Belgium, Belgian officials have participated in an anti-terror sweep designed to arrest potential terrorists wanting to travel to Syria. In Brussel, a mayor banned a Muslim soup kitchen he felt was recruiting angry young Muslims to Syria.
Just as importantly, Europol, the European police agency, says that fighters who return from foreign countries after participating in terrorism “have the potential to utilize their training, combat experience, knowledge and contacts for terrorist activities inside the EU.” After America’s experiences with the Chechnyan-visiting Tamerlan Tsarnaev, Europe is deeply concerned about something similar happening on its own soil.
The European hard left is attempting to stop European authorities from shutting down such travel, however. Jos Vander Velpen, chairman of the Belgian League of Human Rights, says “We are talking about views that these youngsters hold, and you cannot change opinions with a repressive approach.” That was precisely the attitude taken by the authorities with regard to the Tsarnaevs.
Posted by Pastorius at 11:13:00 pm

Cool. I hope they all get to meet their 72 virgins and don't return to Europe.

then lock the damn doors!