Egypt's writing on the wall - Civil War or an Islamic Republic?

President Mohamed Morsi has warned of conspiracies within his government. But some say he wants to simply replace the power structure with one loyal to him.

CAIRO — President Mohamed Morsi casts himself as a leader navigating a landscape bristling with conspiracies by corrupt businessmen and shadowy figures plotting from inside a vast bureaucracy his Islamist inner circle has been unable to tame.
While protesters march, workers strike, students rally and the economy is in a scary tailspin, the president's more serious nemesis may lie behind the scenes in what is known as the "deep state." The courts, police, army and intelligence agencies were shaped over decades by the secular rule of deposed autocrat Hosni Mubarak.
Many police and intelligence officials in particular remain loyal to the old guard, fearing Morsi is moving the country away from its Western alliances and toward religious fundamentalism.
Morsi and his Muslim Brotherhood, which controls the government, accuse those connected to Mubarak of disrupting Egypt's transition. Talk of intrigue is so pervasive that the Brotherhood's website this month blamed "deep state corruption" for food poisoning that hospitalized nearly 500 students at Al Azhar, the country's premier Islamic university.

Recent actions by the judiciary suggest state institutions are in fact moving to put limits on Morsi, who pushed through an Islamist-backed constitution and ignored legal decisions challenging his authority. Court rulings also have delayed parliamentary elections and called for Morsi to reinstate the general prosecutor he fired during a power grab in November. These verdicts came as police and internal intelligence officers — the core of Mubarak's power — have staged work slowdowns and questioned Morsi's legitimacy.
Security agents, police commanders and even clerks wielding rubber stamps are part of an imposing government labyrinth that encompasses the Interior Ministry and an edifice known as the Mogamma, a parallel universe of hundreds of thousands of public employees tied up in a system of patronage and favors.
His political opponents respond that Morsi, who was elected in June, is exaggerating the strength of the previous power structure — and that he wants to simply replace it with one loyal to him. Critics say he wants a Brotherhood version of his predecessor's brand of control and cronyism.
The Brotherhood is backing a bill in the upper house of parliament that could limit judicial independence and force as many as 3,000 judges to retire. Judges claim the legislation is aimed at replacing them with jurists sympathetic to Islamists. Thousands of Brotherhood supporters demonstrated last weekend, calling for a "cleansing" of the courts.
Morsi and the Brotherhood have been "revealed as people who have no experience in ruling and are greedy for domination and power," said Hassan Nafaa, a respected political science professor at Cairo University. "There's a sentiment that the revolution was stolen and that there is an attempt at what many are calling the 'Brotherhoodization' of the state."
More here.

Egyptian Defense Minister Gen. Abdel Fatah al-Sisi warned Tuesday that Egypt could be facing collapse.
Al-Sisi explained that military units have been stationed in cities next to the Suez Canal, where riots have broken out, in order to protect the canal.
“The continuing conflict between political forces and their differences concerning the management of the country could lead to a collapse of the state and threaten future generations,” Al-Sisi said in a speech to army cadets that was also quoted on the Egyptian military spokesman’s Facebook page. Sisi said the country’s economic, political and social challenges signify “a real threat to the security of Egypt and the cohesiveness of the Egyptian state”.
Some see Sisi’s statement as an attempt to remind Egyptians about the power of the military and as a veiled threat to opposition forces. 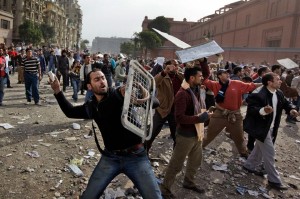 At least 52 people have been killed in riots that broke out a few days ago, at the two year anniversary of the uprising that toppled President Hosni Mubarak. Many of the casualties were in the city of Suez, where the military was sent to quell the riots.
The situation worsened when a court sentenced to death 21 soccer fans who were found guilty of causing the riot in a stadium in Port Said last year, in which 74 people were killed.
Egyptian president Mohammed Morsi announced Sunday that he was placing three cities under curfew because of rioting – Port Said, Suez and Ismailiya. The curfew will be in force from 9:00 PM to 6:00 AM for the next 30 days, as part of a state of emergency declared in these cities.