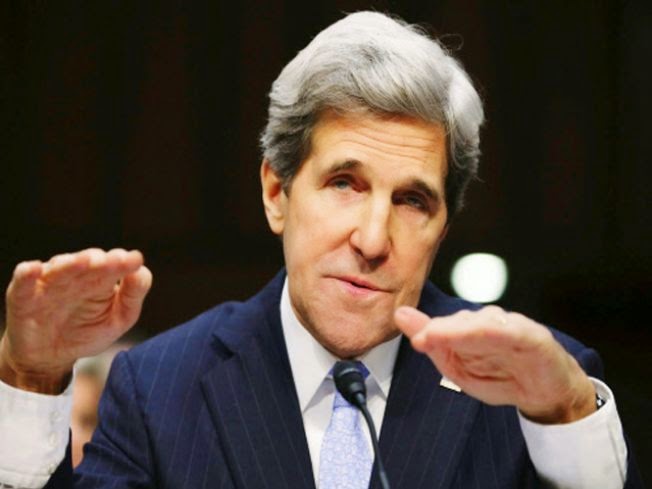 John Kerry is in so far over his head. I've never seen such a mannequin in such an important position.

Attempts by Israeli Prime Minister Benjamin Netanyahu to secure a more stringent nuclear deal with Iran are “not gonna happen,” Secretary of State John Kerry said in an interview published Tuesday.
“The whole mythology I’ve heard, from [Israeli Prime Minister Benjamin] Netanyahu to Republican members of the House and Senate — ‘Oh, just squeeze them to death, raise the sanctions’ — not gonna happen,” Kerry told the Washington Post.
He said the deal in its current form would scale back the amount of time it would take Iran to produce enough fissile material to make a nuclear bomb from three months to one year, and it would require daily inspections of Iran’s enrichment facilities for the next “25 years.”
The secretary of state, who along with negotiators from the UK, Russia, China, France, Germany and of course Iran has been trying to hammer out a deal by June 30, lamented the possibility that Congress could kill an agreement even if all the countries involved accepted it.
“Look, if Russia, China, Germany, France, and Britain, all of whom have nuclear programs, sign off on this, and all their experts say it’s a good deal, and Congress for political reasons wants to go kill it, they’re walking away,” he said.
He said this will spell the end of the sanctions regime because none of these countries would back it if they felt a good deal had gone to waste.

Sooooo...who gets the inspection contract for 25 years???

I'm convinced. There is no way this guy got to where he is on his own. He's too dumb. His wife's money probably bought him all of his political gigs ...

The man is both ignorant and a fool.