Ahmed Mohammed, Hot Dog Vendor At NYC Ground Zero Memorial, Charges $30.00 For A Hot Dog With Mustard, Only Charges $3 When NBC Shows Up 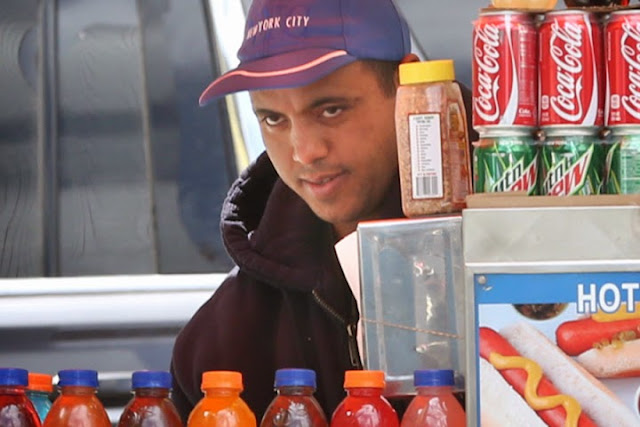 Ahmed Mohammed, only charges $3 to take foot-longs down his throat in bathroom stalls


Meet Ahmed Mohammed. He might be the most expensive hot dog vendor in New York, especially if he thinks you’re a tourist.

NBC 4 New York cameras recently captured him trying to charge a man named David $15 for a hot dog and a pretzel near the World Trade Center.

“I said, ‘What are you, a crook?'” David later told NBC 4 New York. “I’m not a tourist, so I know the price in New York.” Customer after customer recounted how the vendor tried to charge them $20 to $30 for a hot dog.

“I just felt like I was getting ripped off, and it’s just making the 9/11 grounds like a big tourist trap,” one woman said.

Ben from New Jersey left his bitten hot dog behind when he was told the price. “He was like, ‘Fifteen, maybe 10,'” he said. “And I left my bitten hot dog there. That was it.”

Jessica Lappin of the Alliance for Downtown New York said “it gives New York a bad name.” “To rip-off somebody, to charge them $35 for a hot dog and a pretzel, that leaves a terrible impression,” she said.

Lappin learned about Mohammed when fights started breaking out last week over his prices.

When a self-identified NBC 4 New York reporter asked the price of a hot dog, Mohammed said $3. When asked why the price changes, he claimed not to speak English — even though cameras had captured him speaking English earlier, asking customers: “Yes, guys. Yes, sir, you need anything to eat or drink? Have a good day, guys.”

Part of the problem is that Mohammed’s prices aren’t posted, as required by the city’s Department of Consumer Affairs. At a hot dog cart around the corner, for example, there’s no question how much a hot dog costs — it’s listed at $1.