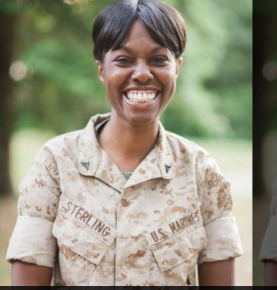 
United States Marine was convicted at a court-martial for refusing to remove a Bible verse on her computer – a verse of Scripture the military determined “could easily be seen as contrary to good order and discipline.”

The plight of Lance Corporal Monifa Sterling seems unbelievable – a member of the Armed Forces criminally prosecuted for displaying a slightly altered passage of Scripture from the Old Testament: “No weapon formed against me shall prosper.”

Sterling, who represented herself at trial, was convicted February 1, 2014 in a court-martial at Camp Lejune, North Carolina after she refused to obey orders from a staff sergeant to remove the Bible verses from her desk.


Yet the military can demand female service members don a veil to adhere to Islamic law in theater?

Those who court martial end this woman should hang for treason!

Has Bergdahl been court martialed yet?

Yet the military can demand female service members don a veil to adhere to Islamic law in theater? Those who court martial end this woman should hang for treason!

Confessions of a Public Defender
sample: "When I am appointed to represent a client I introduce myself and explain that I am his lawyer. I explain the court process and my role in it, and I ask the client some basic questions about himself. At this stage, I can tell with great accuracy how people will react. Hispanics are extremely polite and deferential. An Hispanic will never call me by my first name and will answer my questions directly and with appropriate respect for my position. Whites are similarly respectful.

A black man will never call me Mr. Smith; I am always “Mike.” It is not unusual for a 19-year-old black to refer to me as “dog.” A black may mumble complaints about everything I say, and roll his eyes when I politely interrupt so I can continue with my explanation. Also, everything I say to blacks must be at about the third-grade level. If I slip and use adult language, they get angry because they think I am flaunting my superiority.