AP Publishes ISIS Public Relations Piece As If It Were News

The Jihadi Who Loved Me 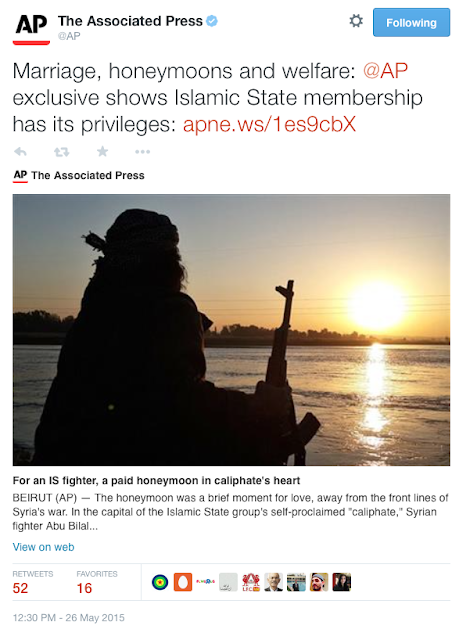 Seriously, take a look at this steaming pile of "Journalism":


BEIRUT (AP) — The honeymoon was a brief moment for love, away from the front lines of Syria’s war. In the capital of the Islamic State group’s self-proclaimed “caliphate,” Syrian fighter Abu Bilal al-Homsi was united with his Tunisian bride for the first time after months chatting online.

They married, then passed the days dining on grilled meats in Raqqa’s restaurants, strolling along the Euphrates River and eating ice cream. It was all made possible by the marriage bonus he received from the Islamic State group: $1,500 for him and his wife to get started on a new home, a family — and a honeymoon.

“It has everything one would want for a wedding,” al-Homsi said of Raqqa — a riverside provincial capital that in the 18 months since IS took control has seen militants beheading opponents and stoning alleged adulteresses in public.

Gunmen at checkpoints scrutinize passers-by for signs of anything they see as a violation of Shariah, or Islamic law, as slight as a hint of hair gel. In the homes of some of the IS commanders in the city are women and girls from the Yazidi religious sect, abducted in Iraq and now kept as sex slaves.

The Islamic State group is notorious for the atrocities it committed as it overran much of Syria and neighboring Iraq. But to its supporters, it is engaged in an ambitious project: building a new nation ruled by what radicals see as “God’s law,” made up of Muslims from around the world whose old nationalities have been erased and who have been united in the “caliphate.”

To do that, the group has set up a generous welfare system to help settle and create lives for the thousands of jihadis — men and women — who have flocked to IS territory from the Arab world, Europe, Central Asia and the United States.