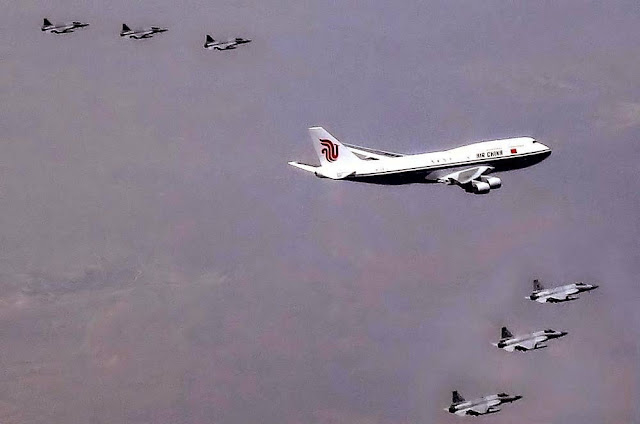 Yesterday, I was in Long Beach, CA and I watched 8 straight C-17's scramble out of Long Beach Airport, and veer out towards LAX.

That was not reported in the news.

But these today, out of the New York City area are making the news.

At Least 6 Reports of Threats to Passenger Planes

An Air France plane was escorted to JFK Airport in New York City this morning after an anonymous threat was made against the flight, law enforcement officials told ABC News.

The FBI said the plane has since been checked and cleared with "no incidents or hazards reported on board the flight by either the passengers or its crew."

Authorities said that the decision to have the plane escorted by two fighter jets was done "out of an abundance of caution" after the Maryland State Police McHenry Barrack, in Garrett County, received an anonymous call of a “chemical weapons threat” aboard Air France Flight 22, which was en route from Paris to the New York City airport.

The tip was called in at 6:45 a.m. on an untraceable line and the caller did not identify himself, a senior federal official told ABC News.

Two F-15 planes were scrambled and followed the plane into U.S. airspace, but they flew in a way so that the passengers and crew would not be able to see the military planes, sources said.

The Airbus A-330 has since landed and was taken between two runways and locked down while the threat is investigated. A police dispatch that was sent out after the jets were scrambled noted that the area where the plane was taken is generally known as the "hijack site" because it is the area used in such scenarios.

During an initial investigation, nothing dangerous has been found on board, the federal official told ABC News.

A Saudi Airlines flight from Saudi Arabia was also escorted to a remote area at JFK. It was cleared and passengers were brought back to the terminal, officials said.

For an American Airlines flight from Birmingham, England, to JFK, the pilot was initially instructed to taxi to a remote area, but the threat was determined not credible and the plane was cleared to go to the terminal.

A threat also turned up negative for a Delta flight from Paris to Logan Airport in Boston, authorities said.