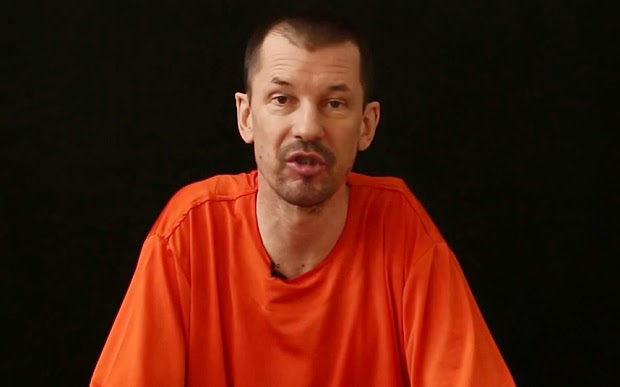 This "British Journalist" is John Cantile. He's the same guy who was kidnapped by ISIS and has proceeded to make propaganda videos for them.

He's a scum, so it's hard to form an opinion on any of the fecal matter that floats from his mouth.

(Telegraph) – The chances of Islamic State jihadists smuggling a nuclear weapon to attack the United States have risen “infinitely”, John Cantlie, the British journalist the group is holding hostage, claims in a new article.
Mr Cantlie’s article appears in the new edition of Dabiq, Islamic State of Iraq and the Levant’s English-language online magazine.
Mr Cantlie, whose fellow journalist hostages have all either been released or beheaded, has appeared in the group’s propaganda videos and written previous pieces.
In his latest work, presumed to be written under pressure but in his hall-mark style combining hyperbole, metaphor and sarcasm, he says that President Obama’s policies for containing Isil have demonstrably failed and increased the risk to America.
He raises a “hypothetical” possibility under which Isil operatives in Pakistan bribe an official to provide them with a nuclear device which is smuggled into America via Libya, Nigeria, South America and Mexico.

He is stating an unquestionable reality. Jihadists are coming in through our Southern border, and into Europe, where if unknown to intelligence agencies, can fly in, no problem.

Several years ago an imam was recorded while explaining how easy it would be to bring in a suitcase either with a dirty bomb or chemical weapons through the drug tunnels via Mexico.

The truth is we are sitting ducks. The truth is the Executive is intent in helping jihadists, and our representatives in Congress do NOTHING, either bought by petro dollars, or due to natural stupidity.