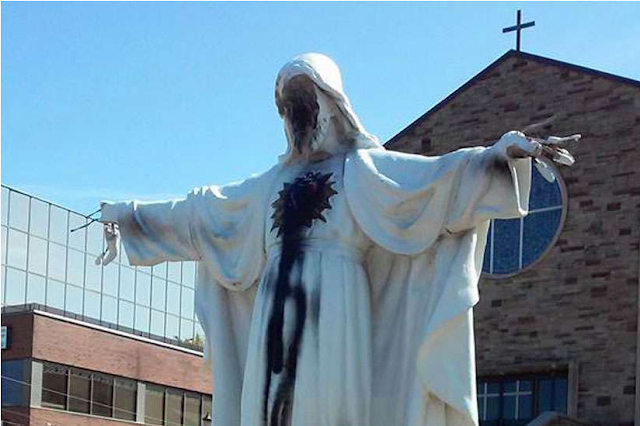 
MISSISSAUGA, ONT. – A 22-year-old Mississauga man has been charged in connection with alleged hate crimes committed at St. Catherine of Siena Church and its neighbouring elementary school over the past two months.

Iqbal Hessan was reportedly arrested in the early hours of May 26 on the Mississauga school’s grounds, though police would not confirm this. Hessan faces five counts of mischief over $5,000, and break, enter and commit indictable offence.

A bail hearing was held later that day. On May 20, the Sacred Heart of Jesus statue that stands in front of the church was covered in black paint and the fingers of its outstretched arms were broken off.

Behind the church, graffiti with the words “There is no Jew God” was scrawled across the brick wall along with a drawing of a face labelled “Jewsus.”

SEND HIM TO THE SHARIA SHITHOLE OF HIS CHOICE!
Posted by Pastorius at 2:53:00 pm