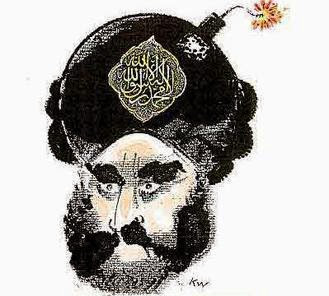 
Five years ago, a cartoonist with The Seattle Weekly, shocked by the way Comedy Central had censored "South Park" after the usual threats from violent Muslims, proclaimed May 20th as "Everybody Draw Mohammed" Day. What was novel about this particular promotion was that the cartoonist, Molly Norris, was not a "right-wing" "Islamophobe" but a liberal progressive, and therefore a rare if not all but unique example of a feminist leftie recognizing that the Islamic enforcers were a threat to her way of life. This was a very welcome development.
Unfortunately, Miss Norris was not so much recognizing reality as blissfully unaware of it. When the backlash against her idea began, she disassociated herself from it and signed off with - Lord help us - a peace symbol. We had some correspondence on the matter, and I write about her in The [Un]documented Mark Steyn (personally autographed copies of which areexclusively available and help to prop up my own free-speech campaign against the climate mullahs) in a chapter entitled "There Is No More Molly":

Now The Seattle Weekly informs us:

'You may have noticed that Molly Norris' comic is not in the paper this week. That's because there is no more Molly.'
On the advice of the FBI, she's been forced to go into hiding. If you want to measure the decline in western civilization's sense of self-preservation, go back to Valentine's Day 1989, get out the Fleet Street reports on the Salman Rushdie fatwa, and read the outrage of his fellow London literati at what was being done to one of the mainstays of the Hampstead dinner-party circuit. Then compare it with the feeble passivity of Molly Norris' own colleagues at an American cartoonist being forced to abandon her life: "There is no more Molly"? That's all the gutless pussies of The Seattle Weekly can say? As James Taranto notes in The Wall Street Journal, even much sought-after Ramadan-banquet constitutional scholar Barack Obama is remarkably silent:
'Now Molly Norris, an American citizen, is forced into hiding because she exercised her right to free speech. Will President Obama say a word on her behalf? Does he believe in the First Amendment for anyone other than Muslims..?'
No one should lose his name, his home, his life, his liberty because ideological thugs are too insecure to take a joke. But Molly Norris is merely the latest squishy liberal to learn that, when the chips are down, your fellow lefties won't be there for you.

And as I added:

Four years later, there was not much left of "Everybody Draw Mohammed" Day, but there was even less left of Molly Norris. As the website Blogwrath put it:

'Because of the Muslim death threats, Molly Norris, who started the event, had to go into hiding and change her name. She disappeared completely and nobody knows whether she is dead or alive.'

Today on this fifth anniversary there is still no more Molly - and now there is no more Luz:

Renald Luzier was running late on the January day when two gunmen burst into the satirical magazine's offices and killed the other five cartoonists who worked for Charlie Hebdo.
Luzier then drew the French satirical magazine's first front cover image after the deadly Islamist terror attack, showing the Prophet Mohammed weeping and saying "All is forgiven."
The cartoon prophet held a sign saying "Je suis Charlie," the slogan of those who stood up for the magazine after the killings.
Luzier, who draws under the pen name Luz, said in an interview with French newspaper Liberation that continuing to work at Charlie Hebdo had become "too much to bear."
"There was hardly anyone left to draw," he said in the interview published on the newspaper's website late Monday. "I found myself doing three front pages out of four..."
Luzier, 43, told Liberation that the decision to leave was "very personal" and that he wanted "to rebuild myself, to regain control of my life."
"Finishing each edition is torture because the others are gone. Spending sleepless nights summoning the dead, wondering what Charb, Cabu, Honore, (and) Tignous would have done is exhausting," he said, referring to some of his murdered colleagues.

Luz was the cartoonist who gave Mohammed his visual style. It was Luz that the Berliner Kurier artist was mimicking in their front-page response to the massacre at top right. Under the headline "NO! You cannot murder our freedom", there was, for once, a cartoon that lives up to it: the Prophet gleefully bathing in blood.
But, one by one, our freedom does get murdered. I don't begrudge Luz his wish to "regain control of my life". To be the lone survivor because you were running late is a blessing but also a curse and a burden. So there is no more Molly, and no more Luz, and no more Lars - not since the post-Charlie attack on Lars Vilks' free-speech event in Copenhagen forced into hiding a splendidly brave artist who had borne the weight of his courage alone for too many years.
Until the 21st-century Islamization of the west got underway, there was a modest but long established tradition in western art of depicting Mohammed. He is shown in Dante's Inferno - in hell, with his entrails hanging out. And any number of artists from Giovanni da Modena to Salvador Dali have offered their own renderings of the scene. He appears carrying a sword and the Koran with Moses, Confucius, Hammurabi and other law-givers in Adolph Weinman's frieze at the US Supreme Court, although since the Council on American-Islamic Relations complained about it the Court's official position is that, yes, that's Moses and Confucius and the rest of the gang up there but this is just some bloke who "bears no resemblance to Mohammed".
One day that excuse will no longer suffice, and the frieze will be hacked apart. Already representations of Mohammed in western art galleries are being carted off to the basement. In the near future, if your local library still carries an edition of Dante's Divine Comedy, it won't be with William Blake's or Gustav Doré's illustrations of Mohammed in the torments of hell.
In Dante's day (circa 1315) and Weinman's day (1935), Muslims who disliked depictions of Mohammed did not generally slaughter artists, writers and publishers. That changed with the Danish cartoons. Once they started killing people for drawing Mohammed it became necessary for everyone to draw Mohammed - to show that there are too many to kill, and thus to teach Islam that, whatever its own proscriptions, they do not and will never apply to non-believers. Once you make drawing Mohammed a capital crime, it is necessary to make drawing Mohammed so universal that it's no crime at all. If you claim the right to kill because you're offended, then it is necessary to offend you all the time - until you accept the messy norms of pluralistic societies.
To be sure, in the scheme of things, it's no big deal not to be able to depict Mohammed - except that small losses lead to other small losses and eventually to greater losses. So certain types of great art become problematic for museums - and thencertain types of museum become problematic.
So I was heartened to see in my own country this event scheduled for today in Ottawa:

Come and join us in drawing Muhammed, the Pope's Mother, Buddha with headphones and or any other religious/political figure!
Let's exercise our freedom to blaspheme — while we still can!!!
We will meet by the East entrance of The Hill Where the October 22nd shooter entered The Hill) at 1 pm and walk to the North-East corner of the lawn, so we are very close to the route the shooter took. There, I will set up the table (and tent, if it rains) and we can get down to some blasphemous art!
Please, spread the word as far and wide as you can.
Alexandra

Can you guess what happened next, boys and girls?

After having been given (last week) the go ahead with the Draw Muhammed Day on Parliament Hill for tomorrow, 20th of May, by the RCMP security people, I have just received a phone call (at 5:25 pm) from Canadian Heritage cancelling the event due to 'security concerns'.

And to reprise Laura Rosen Cohen's line "security concerns" are the new shut-up. As a commenter at Vlad Tepes' blog writes:

This is exactly the modus operandi employed by France's government – to kill off any initiative by our friends at Riposte Laique – they give the permission for a demonstration, assembly etc. and then, when everything is organised, like 5 minutes before the event is supposed to start, they cancel it for "security reasons".

So don't worry, you still have freedom of speech - until five minutes before you're scheduled to exercise it.
Meanwhile, on June 14th, the New York Theatre Workship is presenting a benefit for the National Coalition Against Censorship, under the title Playwrights For A Cause, an evening of three one-act plays. It would have been four one-act plays, but Neil LaBute's work, Mohammed Gets A Boner, will not now be staged because of its "clear offense to Muslims".
No word yet on whether the evening's title will be changed to Playwrights For A Cause, Up To A Point, a benefit for the National Coalition For Self-Censorship.
I think a lot about my poor clueless leftie chum Molly Norris. Where is she? And what did she do to deserve having her life erased? And why do none of her liberal friends ever mention her? There can be no pictures of Mohammed, and so there can be no pictures of Molly, nor Lars, nor Luz, nor of freeborn Canadians at Parliament Hill. Mohammed has his India rubber out, and is erasing us all.

"Unfortunately, Miss Norris was not so much recognizing reality as blissfully unaware of it."

LOL. Only Steyn could have written that line. He is the Mark Twain of our time!