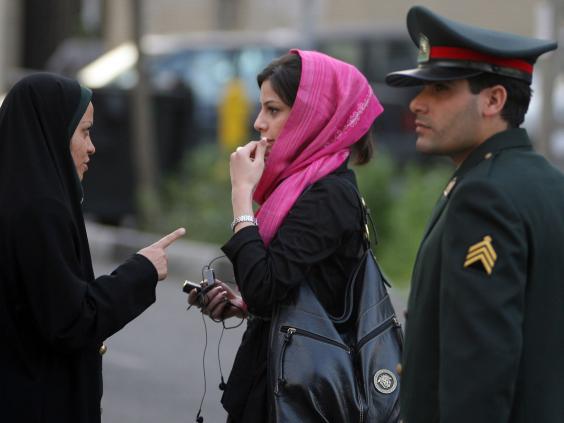 As more and more Western tourists visit Iran, foreign women are being urged to break the country’s strict Islamic dress code to “make a stand” about the restrictive laws.
It is illegal for women to go out in public without wearing headscarf in the country, where thousands of undercover agents and “morality police” patrol the streets to check for violations.
Women found to have their hair or bodies inadequately covered can be publicly admonished, fined or even arrested.

But thousands of Iranians have been risking punishment by taking off their hijabs (headscarves) in public and snapping photos as part of a defiant online campaign to counter the “oppressive” law.


While Muslim phony-rights groups try and trick Western women into wearing a head cloth in order to sell the idea that not allowing the uniform of the Muslim Brotherhood is oppression of women, women living under genuine Islamic oppression are begging Western women who enjoy freedom to help them shake off Islamic misogyny.

What they want is for western wimmin, visiting a racist and genocidal theological terrorship to have at least THREE BALLS.

Hmmm, like this?
Susan Spaak.
A French mother of 2

That's what it will take, women who want to disappear without note, from all of history for 2 or more generations, until someone notices their otherwise unknown bravery against these sons of bitches.