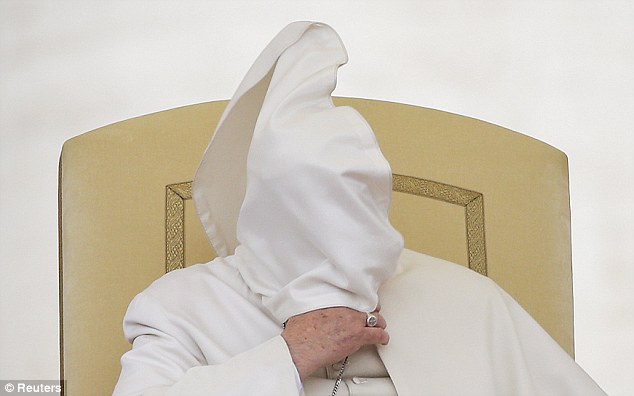 The Pope has been lecturing the world about how walls are bad, and it is our Christian responsibility to take millions of Muslims into our Western nations.

And then, he made a great show of taking in 12 refugees, parading them before the media's cameras in a way that is almost a violation of the Geneva Convention, if one accepts these refugees are victims of war.

Meanwhile, the Pope lives in a walled-compound, surrounded by armed-bodyguards, sitting on a long history of oppression and death threats from the religion of peace.

The Pope knows full well the Muslims want him dead.

He knows his Nuns and Priests are murdered and tortured in the Muslim world.

And he has even gone so far as to request that others use violence in the name of protecting he and his appointed ambassadors of the Faith.


A Christian brother and sister from Syria felt blessed to have been among the dozen refugees selected to start a new life in Italy — but now say their savior, Pope Francis, abandoned them on a Greek island, according to a report.

Roula and Malek Abo, who had been housed in a refugee camp on Lesbos, said they thanked their lucky stars when they found out the Vatican had selected them during the pontiff’s visit to the island last week, the Daily Mail reported.

Their dreams were shattered, though, when they were informed the following day that they would not be traveling to Rome.

Instead, three Muslim families were taken.

Asked why they were all Muslim, Francis said there was something wrong with the papers of a Christian family on the list.

The siblings arrived in Greece on April 1 — 10 days after a controversial European Union deal called for asylum-seekers in Greece to be returned to Turkey.

Their hopes to avoid deportation now hinge on their applications for asylum. “If they can do this for 12 people, they can do it for more,” Roula, 22, told the paper.

“If you have promised to take people back to Italy, will something like registration papers stand in your way?”

My God, time flies and you do not realize how far and fast.It is now over 40 years since I was a very wealthy young man with a very flashy high maintenance Italian mistress/girlfriend. We were looking for a second home near Rome, preferably a vinyard or olive grove to go with it ( that way it is a farm and does not get taxed, the staff gets called agricultural labourers and the farm pays them. Since the Farm is not making any money I have to keep making tax-deductible investments in it, even if only to pay wages) To cut the long story short, we spent three weeks touring very little village on the outskirts of Rome and found only one property that was NOT owned by the church. Whilst the Vatican may only be a small little patch of dirt, the houses and castles and farms that the own in Italy alone run into the billions

Anyone remember the Bojinka plot?

Bojinka was a plot to blow up a dozen airliners or so simultaneously in flight over the Indian and Pacific oceans. It was Khalid Sheik Mohammed and Ramzi Yousef's idea and predated 9/11 by a half dozen years or so. How do you see it in context here?

Oh wait. Killing JP II was also part of it.

This pope is a total fag.