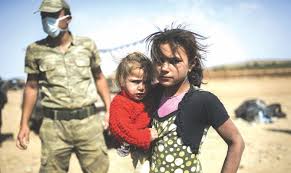 The Children of Islamic State. A Spiegel article on sex slavery by the newest Islamic entity.
Islamic State fighters are known to keep sex slaves. Although they usually force the women to use contraception, many still become pregnant with their rapists’ babies. The women who manage to escape are left with deep emotional scars.

At night, when Khaula lies in bed and finally falls asleep, she often dreams of her child. Each time, the same images appear before her: She sees her hands clasped together in front of her chest, forming a hollow. When she lifts her upper hand, a bird is sitting beneath it. She sees its body and its feathers, but the bird doesn’t look at her, and there is no song to be heard from its throat. Its tiny head is missing.
“Every time I have this dream, I can’t move for a time,” says Khaula. After eight months as an Islamic State (IS) captive, she gave birth to a baby girl. The child’s father had been her tormentor, an Iraqi IS fighter from Mosul. He had plenty of daughters already and had wanted Khaula, a Yazidi woman kidnapped by IS, to give him a son.
That was 12 months ago. Khaula is now living in Germany, without her child. She’s sitting in the side room of a café in the German state of Baden-Württemberg, where she has come to share her story. She’s a quiet woman of 23 with black curls and enjoys wearing Kurdish garments.
Khaula shares a dormitory with other women who have been freed. The location must be kept secret, and the name “Khaula” is an alias. With IS sympathizers in Germany as well, the women are endangered here too.