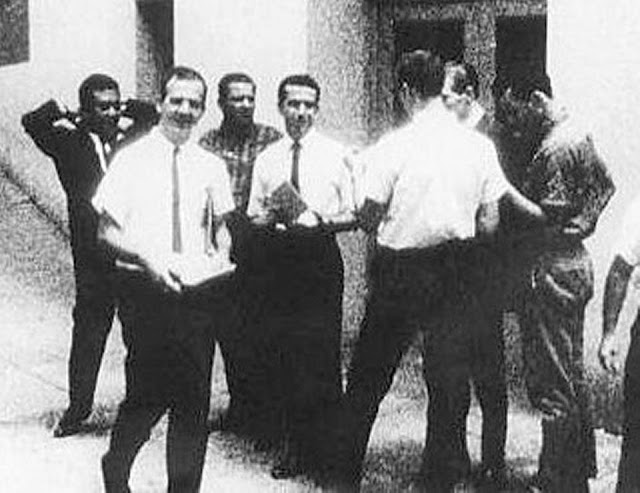 Tabloid says it has proof: Ted Cruz’s father is mystery man in Lee Harvey Oswald photo
Lee Harvey Oswald, front left, standing next to man never identified by the Warren Commission, center in white shirt, handing out leaflets for the Fair Play for Cuba Committee taken outside the International Trade Mart in New Orleans on Aug.16, 1963.

From the Miami Herald:

The National Enquirer is now saying that they have determined through photo analysis that the man is Rafael B. Cruz, father of GOP presidential candidate Ted Cruz.

WASHINGTON The National Enquirer has published what it says is conclusive evidence that Ted Cruz’s father, Rafael B. Cruz, is the man photographed next to JFK assassin Lee Harvey Oswald distributing pro-Castro leaflets in 1963 in New Orleans.

The Cruz presidential campaign fired back unequivocally. “This is another garbage story in a tabloid full of garbage,” communications director Alice Stewart told McClatchy. “The story is false; that is not Rafael in the picture.”

The explosive suggestion that Cruz’s father would have had any affiliation with Oswald is not corroborated in any other way. Cuban-born Rafael Cruz is now a fervent anti-communist, but there was a time he supported then-rebel leader Fidel Castro.

His son, Sen. Ted Cruz, R-Texas, frequently relates his father’s arrest and torture by government officials and subsequent escape to the United States.

The elder Cruz ended up at the University of Texas at Austin and still supported Castro, who led the revolution that overthrew the Batista regime in 1959. Castro formally declared himself Marxist in 1961.

"The U.S. government was duped. The American people were duped. I was duped,” Rafael Cruz wrote in his book, “A Time for Action,” released in January. 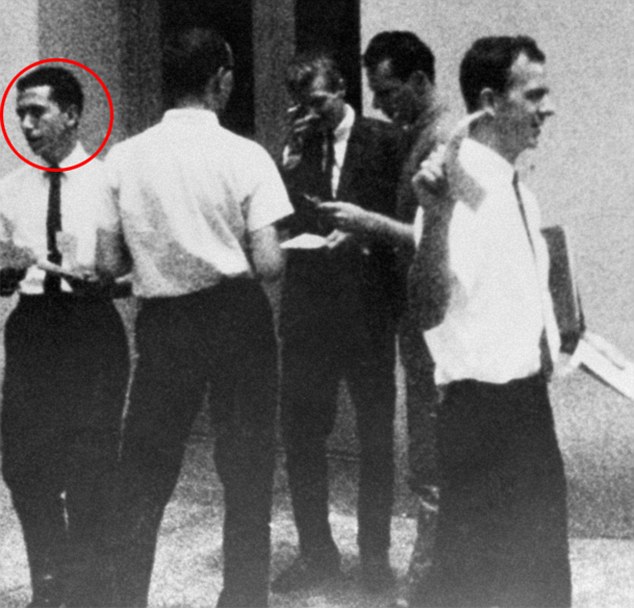 “When people ask me why I supported Castro in over-throwing the Cuban government, I readily admit that I didn’t realize he was a communist.”

There are photos of Rafael Cruz participating in a pro-Castro rally in 1959 and an article in the student newspaper where he describes his support for Castro.

And one report questions the extent of the elder Cruz’s connections to Castro before fleeing Cuba.

The photos of Oswald distributing pro-Castro literature are from August 1963, just a few months before the JFK assassination in Dallas, which the Warren Commission Report on the Assassination of President John F. Kennedy said was carried out by Oswald.

The tabloid hired photo experts who compared the elder Cruz’s photos from the late 1950s and early 1960s with the ones released by the Warren Commission.

The man in the white shirt next to Oswald was never identified by the commission, and the Enquirer is now saying it was Cruz and blasted on its May 2 cover that “Ted Cruz Father Now Linked to JFK Assassination!”

Was the father of presidential hopeful Cruz involved in the JFK assassination?

Based on the presence of the elder Cruz, an anti-Castro activist, in Dallas and New Orleans before the November 22, 1963, assassination of President John F. Kennedy, there is a strong reason to believe that Cruz was associated with Central Intelligence Agency's anti-Castro operations.

Furthermore, a Cuban hired by alleged JFK assassin Lee Harvey Oswald and who bears a striking resemblance to Cruz is seen in an iconic photograph of Oswald and a group of Cubans Oswald hired who were distributing "Hands off Cuba!" pamphlets in New Orleans in the summer of 1963.

The photo of Oswald and other Cubans he hired for the Fair Play for Cuba Committee was taken outside the International Trade Mart in New Orleans on August 16, 1963.

WMR has been informed by a source that the individual to Oswald's left is none other than Rafael Cruz. The photograph at the trade mart was favorably compared to a 1957 photograph of Cruz attached to an official Cuban Ministry of Education document. 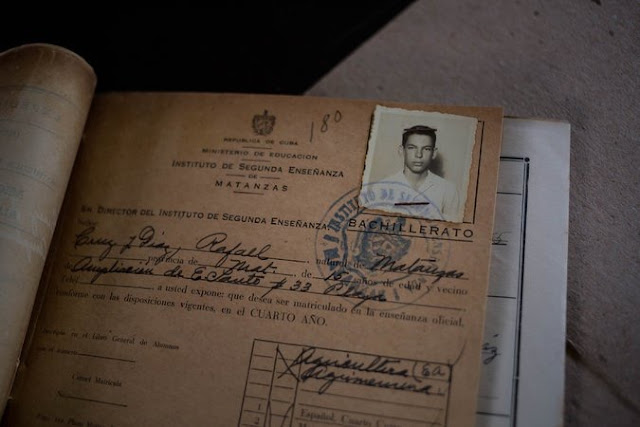 For the record, I do not believe this story. HOWEVER, Cruz' father is out of his fucking mind. He believes his son is "ANOINTED" by God "to take control of society."

What happens to an intelligent, moral, and driven man if he is involved in something, even peripherally, that leads to the assassination of a major historical figure?

The answer: HE GOES CRAZY.

What I'm saying here is, if this story were true, it would explain what is wrong with Rafael Cruz. In a way, he could be seen as making Herculean efforts to make up for his past sins, by doing something, and being a part of something that would bring about, what he sees as, an immense good for society.

On the other hand, this could just be the new "Obama was born in Kenya" story for 2016. More likely it is just that.

After all, Wayne Madsen is pretty fucking cray-cray himself:


In 2014 Madsen self-published a book that said that both Israel and Saudi Arabia were intimately involved in planning and carrying out the 9/11 attack on the United States as a "false-flag" attack.

Madsen has reported that Obama is gay. The Nation writing on that conspiracy theory reported that Wayne Madsen "is the source on Obama’s visits to the bath house and who revealed how Obama used basketball pickup games to pick up men. Obama, Madsen says, had homosexual trysts with Representative Artur Davis, Massachusetts Governor Deval Patrick and Senate majority leader Bill Frist!"

In 2012 Madsen self-published a book Manufacturing a President that said that Barack Obama was a creation of the CIA.

In 2003 he claimed that he had uncovered information in a classified congressional report that he said contained information linking the September 11 attacks to the government of Saudi Arabia and the Bush administration through financial transactions with the hijackers. The Saudi Foreign Minister demanded the report be declassified so it could respond, however, the Bush administration refused, claiming that to do so would compromise intelligence sources and methods.[38]

More here:
4/7/2016 Milfuegos: Was the father of presidential hopeful Cruz involved in the JFK assassination? by Wayne Madsen Report

I have no idea what his involvement in world events may have been. But one thing is clear: there is a strong resemblance between that pic and what the elder Cruz must have looked in his youth.