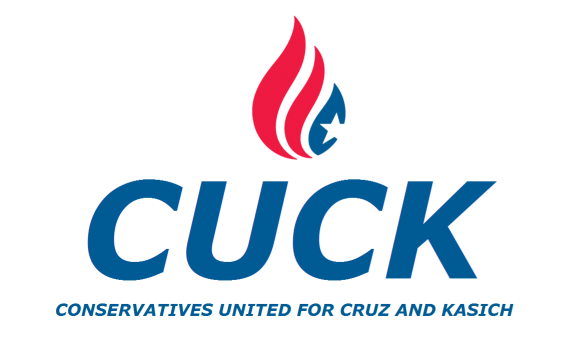 The absurdity of these two clowns astonishes me.

Neither man has a path to claiming the nomination outright and there is a case to be made that even combined they couldn't secure the nominaton outright.

So instead of giving a shit about the country or their party or the will of the voters they are goin to tag team against Trump just to make sure he is thwarted.

I don't know how much more petty you can get in politics.

But then again it's still seven months until the election and I have pretty much lost perspective on absurd this year.

Rest assured, at this point with these latest shenanigans if Trump is not the nominee I will either pull the Libertarian lever (as one of our commenters has also stated), not vote or write in one of our contributors names.

And I will not vote for any Republican incumbent.

The presidential campaigns of Texas Sen. Ted Cruz and Ohio Gov. John Kasich announced late Sunday that they were coordinating their efforts in three upcoming primary states in an extraordinary attempt to prevent Republican front-runner Donald Trump from clinching the GOP nomination before this summer's convention.
In a pair of simultaneously released statements, the campaigns announced that Kasich would pull out of Indiana to give Cruz "a clear path" ahead of that state's winner-take-all primary May 3, while the Cruz campaign will "clear the path" for Kasich in Oregon, which votes May 17, and New Mexico, which votes June 7.
"Having Donald Trump at the top of the ticket in November would be a sure disaster for Republicans," Cruz's campaign manager, Jeff Roe, said. "To ensure that we nominate a Republican who can unify the Republican Party and win in November, our campaign will focus its time and resources in Indiana and in turn clear the path for Gov. Kasich to compete in Oregon and New Mexico, and we would hope that allies of both campaigns would follow our lead."

RCP Poll Average for Republican Presidential Nomination | InsideGov
The arrangement marks a sharp reversal for Cruz's team, which aggressively opposed the idea of a coordinated anti-Trump effort as recently as late last week. Yet it underscores a bleak reality for the billionaire businessman's Republican foes: Time is running out to stop him.
Trump responded on Twitter shortly before midnight Monday.


A statement from the Trump campaign called the move "a horrible act of desperation from two campaigns who have horribly failed."
The Kasich campaign confirmed to Fox News that it had canceled two Indiana campaign events scheduled for Tuesday. As recently as three days ago Kasich's campaign announced investments in Indiana, including the opening of two offices and the creation of a campaign leadership team.
Campaign manager John Weaver said in his statement that the Kasich team hoped to perform well in Oregon and New Mexico, which Weaver said were "structurally similar" to northeastern states where Kasich performed well earlier in the cycle.
"Our goal is to have an open convention in Cleveland," Weaver added, "where we are confident a candidate capable of uniting the party and winning in November will emerge as the nominee."
The announcement came less than 48 hours before voting begins across five Northeastern states where the New York billionaire is poised to add to his already overwhelming delegate lead. Trump campaigned Sunday in Maryland, which will vote on Tuesday along with Rhode Island, Connecticut, Pennsylvania and Delaware.
Trump needs 1,237 delegates to win the Republican nomination. If he falls short, the national Republican gathering in July will evolve into a rare contested convention.
At a rally in Hagerstown, Md., Trump stressed repeatedly that he expects to win the 1,237 delegates needed in the first round of voting to stave off a contested convention.
"I only care about the first. We're not going for the second and third and fourth and fifth," said Trump.
Even before the plan was announced, Cruz had all but abandoned the Northeastern states in favor of Indiana, which holds its primary on May 3. Both Cruz and Kasich had cast the state as a critical turning point.
"Keeping Trump from winning a plurality in Indiana is critical to keeping him under 1,237 bound delegates before Cleveland," Kasich's campaign said Sunday. "We are very comfortable with our delegate position in Indiana already, and given the current dynamics of the primary there, we will shift our campaign's resources west and give the Cruz campaign a clear path in Indiana."
Indiana will award 57 delegates to the winner of its primary. Oregon and New Mexico have 28 and 24 proportionately awarded delegates at stake, respectively.

The clowns Cruz and Kasich are proving that the GOP really is the Party of Stupid. Or worse.

These clowns seem not to know that as WE THE PEOPLE watch, we are getting more and more furious.

And one doesn't have to be a Trump supporter to be angry about all this crap polluting the nomination process.

Cruz is fixated on what Trump said about bathrooms. See this at The Hill.

"And one doesn't have to be a Trump supporter to be angry about all this crap polluting the nomination process."

Charlie Daniels Band: Why Trump? Dec. 11
To say Donald Trump is brash, self-aggrandizing, abrasive and given to 360º offensive statements would be an understatement of universal proportions.

He has bragged, bashed, bullied and bulldozed his way through months of rabid criticism from, among others, his own party, predictions of his demise for verbally going too far and enough negative print to paper the south wall of the Grand Canyon.

Why in spite of the adversity, the condescension and dire prophecies of fading away, he rolls on in juggernaut-like fashion, defying every traditional political rule in the book, garnering phenomenal poll numbers, leaving well-financed establishment candidates foundering in the starting blocks and scratching their heads in bewilderment.
The Republican establishment has blown it. For years now the GOP faithful have heard promises to curb Obama's excesses, do something about our Southern border, take on the rising tide of Islamic terrorism - both foreign and domestic - fix the Obamacare morass, our out- of-control entitlement debacle and address the myriad of problems that threaten America’s future.

And after achieving a majority in both houses, they have done basically nothing, caving to every ill-conceived Obama initiative, fearing media reaction, refusing to take any kind of bold action, coming off like a gaggle of cowards or a herd of sheep, yet telling us if they could only gain the White House they would be able to get the job done.

Well, the people of America just ain’t swallowing it anymore. They're sick of the “same old same old “and want to break out of the mold and elect a man of action, one who speaks in a language the common man can understand. (Go read the rest at the link)

Cruz is a total POS.

May I suggest you put this very apt graphic at the top of this post:

That "CUCK" image at the top is PERFECT.

And that logo is a perfect reminder of the Obama campaign ... Well done!

Shouldn't it be "CLUCK": Conservative Loyalists....? From there to Cluster Cluck is not too big a leap. wink