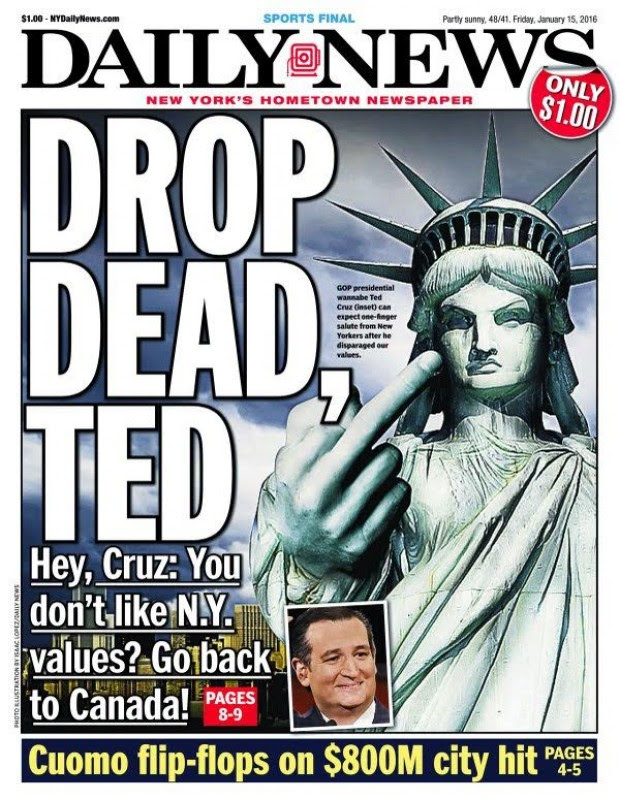 Because just listened to his interview with Hannity, referenced by Pasto here: Ted Cruz Is A Lyin' POS

What the hell is wrong with Ted Cruz?

Does he believe his own legend -- that he is the anointed one and the fulfillment of Mormon prophecy?

I think he truly believes he has been anointed by God to be the next president of the US (like his father publicly said), not sure about the Mormon thing.

I think he thinks that BECAUSE he is anointed, anything he does to become the president is justified. This includes consistently lying, cheating, subverting the system and stealing.

He's also copied liberal attack tactics to the letter and used them against Trump supporters (calling them names, for example).

I think these were all part of his personality long before he ran for president but now that he feels justified in his actions, he doesn't feel the need to hide his true personality.

I see Ted Cruz as no different than a Muslim or a liberal in his "the end justifies the means" approach. He is a very dangerous individual.

He thinks he knows best and anyone who disagrees with him is wrong and a fair target as the enemy.

Cruz thinks his lying and cheating is justified because he has support straight from God whereas Hillary is bought and paid for by money. I see her as the lesser of two evils here.

I can't recall if Cruz behaved as the anointed one prior to becoming endorsed by Glenn Beck (another self anointed guru).
Once of fan of both Beck and Cruz, I cannot bring myself to wade through those puddles anymore. They each possess important skills yet are poisoned with false visions of grandeur, misguided altruisms and false-prophet-itis.

Anonymous,
I can't recall if Cruz behaved as the anointed one prior to becoming endorsed by Glenn Beck (another self anointed guru).

Cruz was always arrogant, with an air of self-righteousness. Worse now than before, IMO.

Nico,
Cruz thinks his lying and cheating is justified because he has support straight from God

I think its because of what he believes himself and what his father preaches rather than Glenn Beck. Glenn Beck just happens to be saying the same thing.

Found this article on this weird site interesting: http://www.nowtheendbegins.com/ted-cruz-believes-he-is-an-anointed-king-for-end-times-transfer-of-wealth/

Can't vouch for anything said there but it is still interesting and lines up with a lot of what I have found.

Still take the information there with a grain of salt.

Nico,
That link is worth exploring, IMO. Lots of embedded links.

And there's also this in the body of the article -- and the statement appears to be substantiated via further links:

Ted Cruz press people will tell you endlessly that he is a born-again Christian, and he may well be. But Ted Cruz is also a member of a strict fundamentalist branch of the Southern Baptist Church but also has deep roots in the Dominionist theology...