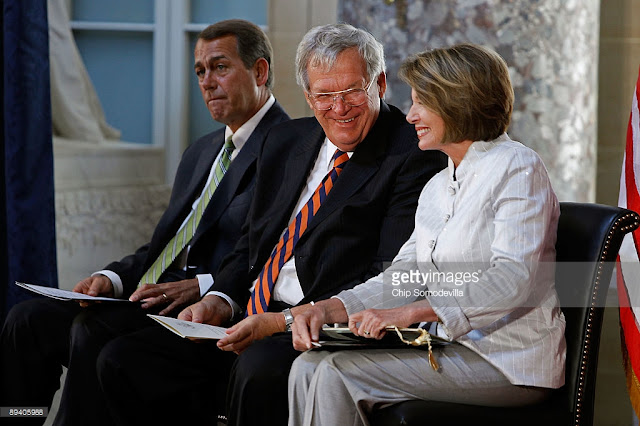 Or, I should say, I TAKE THIS AS AN ENDORSEMENT OF CRUZ.

Because John Boehner is a POS.


John Boehner sounded off a litany of insults for Republican presidential candidate Ted Cruz Wednesday night, labelling the Texas senator "Lucifer in the flesh" and a "miserable son of a bitch."

"I have Democrat friends and Republican friends," the former House speaker said during a frank on-stage discussion at Stanford University Wednesday.

"I get along with almost everyone, but I have never worked with a more miserable son of a bitch in my life." Boehner, who retired from Congress at the end of October, also let loose on the two other GOP candidates in the race.

Of his relationship with Ohio Gov. John Kasich, Boehner said that he was "my friend, and I love him" -- but with the caveat that Kasich "requires more effort on my behalf than all my other friends."

Boehner said he was on friendly terms with Republican front-runner Donald Trump, adding that he often played golf with the New York business mogul and billing their friendship as one between "texting buddies."

The ex-congressman seemed to accept that Trump would be the party's nominee and said that he would vote for him if that prediction came to pass. Boehner said he would not, however, cast a ballot for Cruz if the Texas senator won the nomination.

"Boehner, who retired from Congress"...

Retired? B.S. We the people were fed up with his "cross-the-aisle" b.s. and he was forced out...and it's obvious he remains bitter about it.

WaPo: Long before John Boehner called Ted Cruz ‘Lucifer in the flesh,’ he called him his lawyer

CNN: Ted Cruz on John Kasich bond: 'There is no alliance'

RealClearPolitics: Carly Fiorina on Mark Levin: Kasich Should Drop Out Of The Race

Just a perfectly timed attack so Cruz can use it to show his worshippers how much of an outsider he is while in reality being a Washington insider all along.

Was Kasich played by Cruz in that temporary 'alliance' to deny Trump enough delegates? Cruz was to head to Indiana while Kasich was to head to Oregon. Now Cruz denies such alliance existed!

The Kasich campaign, it seems, never sent the candidate’s bio or positions on the issues to be included in the official 2016 Oregon Voters’ Primary Pamphlet. He is not even named as a Republican presidential primary candidate on a very short list which only includes Trump and the Texas senator.

The missing info was not missed by those on social media, including reporters at Rolling Stone, who tweeted, “How is Kasich going to #StopTrump if he can’t even get into the Oregon voters’ guide?”

Kasich is an idiot for trusting eliminaTED. His whole campaign has been so full of lies and backstabbing maneuvers that only a retard would think any deal could be made with him.

The guy's a snake and he can't help but act like it too.