Islamisation is banned by the constitution in Hungary 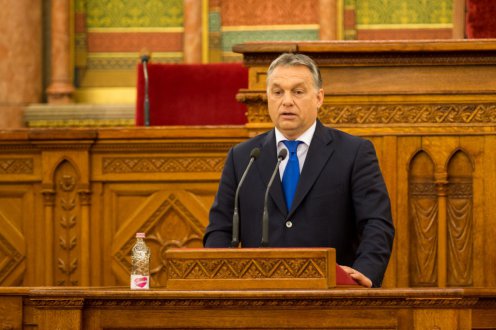 We need this government!

Islamisation is banned by the constitution in Hungary


At a ceremony on the fifth anniversary of the promulgation of the Fundamental Law, Prime Minister Viktor Orbán stated that Islamisation is banned by the constitution in Hungary.

The Hungarian government cannot support any mass migration movements which could lead to results conflicting with the National Avowal contained within the Fundamental Law.

“Neither the legislature nor the government of the day may pursue such a policy within constitutional boundaries”, he said. He said that in drafting the “Schengen 2.0” action plan, the Hungarian government is fulfilling its constitutional obligation to protect Hungary’s citizens.

The external borders must be protected, and procedures regarding those wishing to come to Europe must be conducted outside the EU, in enclosed and guarded areas, the Prime Minister reiterated.

In his view it is likewise reasonable to expect illegal migrants to be sent back without delay to safe transit countries, or to their countries of origin if the latter are safe.

He also argued that development and visa agreements with countries outside Europe must be tied to conditions.

Mr. Orbán pointed out that it is important that the responses to demographic and labour market challenges are the sovereign decisions of Member States.

He added that this is not in conflict with the principle of the universal protection of refugees.

An impressive first step. I want to see the European Continent as well as the entirety of Western Civilization institute an immediate and WHOLESALE BAN ON ISLAM

Best Baseball Play EVER 04:07 video April 26th, 1976, 40 years ago today....Rick Monday rescues American flag during attempt to set it on fire on the field during 4th inning of a Cubs game against the Dodgers in Dodger Stadium.