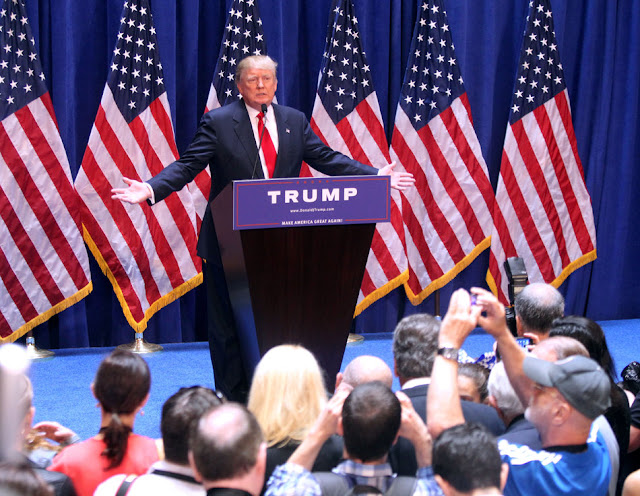 
Super Tuesday, April 26th! What a historic event! Five states, all counties in five states. The sweep across the political landscape was a definite shock-and-awe.

Mr. Trump is correct when he declared himself the presumptive presidential nominee last night. The math does not lie. Americans are speaking with unified voice. The GOP can go to hell or join the party.

Unfortunately, Mr. Trump’s remarks and press conference left much to be desired last night because of press corps ineptitude. At least one member of the press corps left their audio in live status, thus creating a subtle cacophony of background noise which continued along for several minutes into the question and answer session. This was noted at both CNN, and also when I dashed back to my computer to view a live stream.

I was unable to discern the direct nature of how one question was presented. But Mr. Trump was firm in his response. No. There is not a “Trump Doctrine”. He spoke again of the need for flexibility in the policy arena which recognizes the changing tides of history.

So there is not a “doctrine”. The presidential candidate is very cunning. He is intuitive in his ability to grasp things. Proclaiming a “Trump Doctrine” would have allowed the press corps endless hours to pontificate, spin, and imagine the nature of such a magical policy creature.

That being said, I do believe there is a Trump Doctrine. I have carefully listened to Mr. Trump for many months. Everything he conveys to the American people has a basis in this one cogent sentence:

Sound too simple? Sometimes genius is very simple. Consider the sentence again and plug it into every issue that Mr. Trump hammers away at day after day.

Job creation… modernizing NATO’s financials… providing truly affordable healthcare… clipping Federal Branch intrusion and wingspan into local communities…pushing back against the illegal throngs which are “pouring across our borders”… and marginalizing inept and corrupt politicians’ involvement in the granular details of our trade deals mean one thing:

There you have it. The Trump Doctrine.

Donald Trump: He wants our future generations to be blessed.

Do you love your children? Vote for Donald Trump.

The man built a business empire. He understands that American money should first be used to bless Americans.

When did we last hear a candidate take this position?

Thank you, Pasto, for taking care of the administrative end of what I contribute to the pool of thought.

The second political stun gun was Cruisin' along to defeat announcing a VP pick prior to the national convention. One should never posture in such desperate manner.

Difference between Cruz and Trump? If Rubio had shot off his mouth about Cruz' "hands" he would have hid them behind his back. Trump? Well, we know what he did! smile Cruz miscalculates under pressure. Trump thrives in a pressure cooker environment.