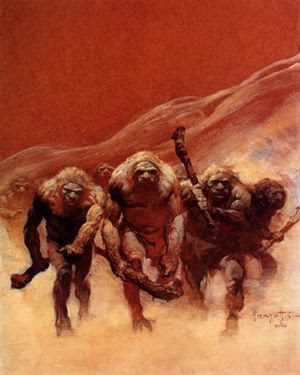 A herd of Muslims. You never know when, or which way, they're going to turn. A herd has a mind of its own.
And, in this case, that mind is called, the will of Allah.
From AINA:

One thousand Christians were today trapped inside the Coptic Orthodox Church of the Virgin Mary in West Ain Shams,Cairo, after more than twenty thousand Muslims attacked them with stones and butane gas cylinders. The Church's priest Father Antonious said that the situation is extremely dangerous.

The Muslim mob that attacked the church blocked both sides of the street and encircled the church building, broke its doors and demolished its entire first floor. The mob were chanting Jihad verses as well as slogans saying "we will demolish the church" and "We sacrifice our blood and souls, we sacrifice ourselves for you, Islam", while the entrapped Christians chanted "Lord have mercy".

The incident started on the occasion of the inauguration of the Church today, when the Muslims hastily established a Mosque in the early hours of this morning, by taking over the first floor of a newly-built building facing the Church and started praying there.

When the security forces tried to disperse the mob, they went to nearby homes and shops owned by Christians, and were armed with sticks, butane, knives and other sharp objects. Witnesses said the mob included children from as young as 8-years old to men of over 50-years old, in addition to women.

The Church building was originally a factory that was adapted into its present state, the matter which took over five years to complete and to get the necessary permissions from the authorities to have a Church established.

Human rights organizations and lawyers were refused entry into the besieged Church.

Quite a busy 24 hours for the jihadomaniacs.

I guess it's up to Allah, loving and peaceful god that he is.

Just another kristallnacht day in the ummah

This is not a significant story in the history of dhimmis

THAT'S WHY IT'S SIGNIFICANT

I have also posted this at the blog, translated into Spanish. The most interesting thing in all the story is the difference between the songs they where singing:
a) the Muslims were praising Jihad and saying they were going to sacrifice themselves to Islam.
b) the Christians were singing "Lord Have Mercy".

Thanks for pointing that out, Nora. You're right.

This is actually a canonical story of the difference between Islam and Christianity, isn't it?