Yo-Ho-Ho-Ho, A Pirates Life For Me 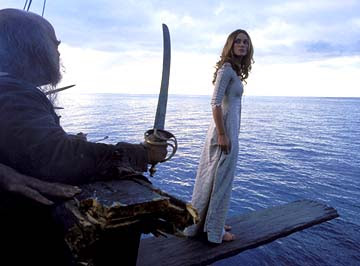 By Caroline B. Glick

A Somali pirate and a former US Defense Secretary are flying to London for vacation. One of them is stopped at immigration at Heathrow Airport and arrested on suspicion of committing war crimes. Which one do you think it was?

On Tuesday Somali pirates, sailing in little more than motorized bathtubs, armed with automatic rifles and RPGs, and sustained by raw fish and narcotics successfully hijacked the Sirius Star, a Saudi-owned oil tanker the size of a US aircraft carrier. The tanker was carrying some $100 million worth of crude oil. News of its capture caused global oil prices to rise by a dollar a barrel.

The next day, Somali pirates attempted to hijack the Trafalgar, a British frigate, but were forced to flee by a German naval helicopter dispatched to the scene. They did manage to hijack a Chinese trawler and a cargo ship from Hong Kong. They nearly got control of an Ethiopian ship, but it too was saved by the German navy that heeded its call for help in time.

Piracy is fast emerging as the newest old threat to stage a comeback in recent years. Over the past week and a half alone, 12 vessels have been hijacked. And according to the International Maritime Bureau, in the three months that ended on Sept. 30, Somali pirates attacked 26 vessels, capturing 576 crew members. Britain's Chatham house assesses the ransoms they netted at between $18 million and $30 million.

And with financial strength comes increased military sophistication. The US navy expressed shock at the pirates' successful hijacking of the Sirius Star. The pirates staged the hijacking much farther from shore than they had ever done previously.

Beyond the personal suffering incurred by thousands of crew members taken hostage in recent years, piracy's potential impact on global economic stability is enormous. In the Gulf of Aden, where the Somali pirates operate, US shippers alone transport more than $1.5 trillion in cargo annually.

One of the unique characteristics of pirates is that they appear to be equal opportunity aggressors. They don't care who owns the ships they attack.

On August 21, Somali pirates hijacked the Iran Deyanat, a ship owned and operated by the Iranian Revolutionary Guards-linked Islamic Republic of Iran Shipping Line (IRISL). In September the US treasury Department designated IRISL as a company that assists Iran's nuclear weapons program and placed it under stiff financial sanctions.

Iran Deyanat's manifest asserted that its cargo included minerals. Yet shortly after the pirates went on board they began developing symptoms like hair loss that experts claim are more in line with radiation exposure.

According to reports, some 16 pirates died shortly after being exposed to the cargo. Just this week, a second Iranian ship — this one apparently shipping wheat — was similarly captured.

Then too, in September pirates seized the Faina, a Ukrainian ship carrying 33 Russian-made T-72 tanks. The Ukrainians and Russians claimed that the tanks were destined for Kenya, but it later emerged that they may have been seized en route to Sudan. So ironically, in the case of both the Faina and the Deyanat, pirates may have inadvertently saved thousands of lives.

The international community is at a loss for what to do about the emerging danger of piracy. This is not due to lack of capacity to fight the pirate ships. On Monday an Indian naval frigate, the INS Tabar, sank a pirate "mother ship" whose fleet members were attacking the Tabar in the Gulf of Aden. NATO has deployed a naval task force while the American, French, German and other navies have aggressively worked to free merchant ships under attack by pirates.

As David Rivkin and Lee Casey explained in the Wall Street Journal on Wednesday, the problem with contending with piracy is not so much military, as legal and political. Whereas customary international law defined piracy as a threat against all nations and therefore a crime for which universal jurisdiction must be applied to perpetrators, in today's world, states are unwilling to apprehend pirates or contend with them because they are likely to find themselves in a sticky legal mess.

In centuries past, in accordance with established international law, it was standard practice for naval captains to hang pirates after capturing them. Today, when Europe has outlawed capital punishment, when criminal defendants throughout the West are given more civil rights than their victims, and when irregular combatants picked off of battlefields or intercepted before they attack are given — at a minimum — the same rights as those accorded to legal prisoners of war, states lack the political will and moral clarity to prosecute offenders. As Casey and Rivkin note, last April the British Foreign Office instructed the British navy not to apprehend pirates lest they claim that their human rights were harmed and request and receive asylum in Britain.

The West's perverse interpretations of human rights and humanitarian law, which bar it from handling one of the most acute emerging threats to the international economy, is a consequence of the West's abdication of moral and legal sanity in its dealings with international terror.