Bring On The Piss Christ

Other "Conservative" "Anti-Jihad" blogs are running photos of Andres Serrano's famous artwork, Piss Christ, which is being displayed at some Museum of Sodomy, uh, I mean Art Gallery, somewhere in the United States.

When viewed from a World Historical perspective, Piss Christ is that rare artwork whose subject is it's very own existence, and whose meaning grows as it becomes more and more viewed. Why do I say that?

Christ on a cross submersed in the piss of the world.

Every person who views it only confirms it's truth.

The pure sacrifice of God, the Messiah to the whole of Humanity, the mediator, and expiator, between God and Man, God in the Flesh, come to restore our relationship to Himself, to make it possible, once again, for us to be clean in the sight of the Lord,

The Bible tells us this is what humans did to Christ as he walked towards his death; we mocked Him, cursed Him, spat upon Him, threw rocks at Him, and cheered as He was crucified.

So, why should there not be a work of art which carries on the Tradition? Why should this artwork not become the living embodiment of the fact that humans have learned little in the last 2000 years, that we would still crucify Christ if He visited us again in the same way?

IBA says, let Muslims riot over jokes. Let sheltered Christians whine over obvious reality. Let us here at this site be above such naivete. Piss Christ is not so much an insult to God as it is just a re-confirmation of the Truth of the Word of God.

Why would we be offended by that? Is it a surprise in any way? Were your expectations any different? No, they weren't, were they?

Bring on the Piss Christ. 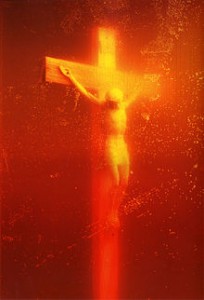 Here's something I wrote about Piss Christ in June of 2005:

Go ahead, piss on God. It couldn't be worse than the fact that we murdered Him. Yes, that's right, we took Him from his friends at dawn. We kicked him, and beat Him. We whipped Him. We made Him carry our cross. And then we hung Him on it, until He died.

I am so sick of all this idolatry from the media, who are all of the sudden so concerned that a Koran got stepped on, or got hit with wayward urine. The Koran is not God, it is an object. To confuse an object with God is idolatry.

The Koran is not Holy as an object, nor is the Bible for that matter. Muslims and Christians may consider their books to be Holy, but I am not duty-bound to agree. If they are Holy in any sense, it is in the ideas they put forth. Ideas are not objects. They can not be bound up in objects. They fly free, indeed, must fly free, to mean anything. They must fly from one thing to another touching the lives and hearts of many people or they are worth nothing.

The media are a group of people who are typically not concerned with the desecration of religious images, but all of the sudden they are starting a crusade against the United States military for the inadvertant desecration of the Koran. We have to wonder why they care. Could it be that they are not only guilty of idolatry, but hypocrisy?

Let's face it, the truth is that Piss Christ is an accurate portrayal of reality. We are not done crucifying Christ yet. God has promised us that it is finished, that it is all over, and yet we continue it. He has forgiven us already, but we are not done killing Him.

And this recent media foray into hypocritical idolatry is just more piss on Christ. Do not fool yourself for a minute, when we murder the Truth, we are at war with God.
Posted by Pastorius at 2:57:00 pm