Good News, The Beer Survives: Planning For a Nuclear Apocalypse 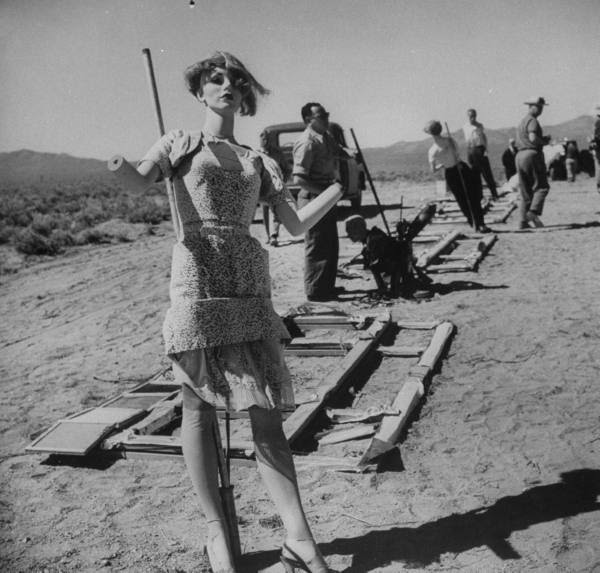 Yeah, the beer still works, but all the chicks look like this

Planning for The End is hard. Nuclear apocalypse is big and scary and complicated. Average people don’t want to plan at all — just assume the worst and you’ll never be disappointed. Governments, on the other hand, like to plan. Some people see this as an effort to legitimately save lives; others see it as an attempt to convince the public (or themselves) that they are in control of the uncontrollable. There are merits to both points of view.
All sorts of things have been studied in the name of Civil Defense — of what to do after the Worst Happens. Two questions along these lines I’ve already discussed in the past: What do you do with all of the dead people? and What will happen to all of our paper-based records? Both of which have “interesting” answers.
Operation Teapot was a series of fourteen nuclear weapons tests conducted in 1955 at the Nevada Test Site, and a number of them were specifically for getting information on nuclear effects for use in Civil Defense. One of these tests, dubbed Operation Cue, was “open” in the sense that the press was allowed to observe it, and it involved nuking a “Survival Town” full of mannequins, the pictures of which were featured prominently in The Atomic Café and were the inspiration for that improbable opening scene to the most recent Indiana Jones movie.
One of the many lines of investigation during these Civil Defense tests, Project 32.2a, sought to answer a simple question: What will the survivors drink in the post-apocalyptic world? If the water supply is contaminated or otherwise dodgy, what about all of those cans and bottles that capitalist society churns out by the billions of gallons? The introduction to the final report explains that while lots of attention had been given towards the effects of nukes on food, beverages had been largely ignored:1

Consideration of the problems of food supply show the needs of humans for water, especially under disaster conditions, could be immediate and urgent. At various times some consideration has been given to special packaging of potable water, but since packaged beverages, both beer and soft drinks, are so ubiquitousand already uniformly available in urban areas, it is obvious that they could serve as important sources of fluids.

When the only tool you have is a hammer, all your problems look like nails. The Atomic Energy Commission did what they did best and dropped a nuke on bottles of beer and soda cans. (They were “exposed,” in the euphemism of the report. I also love the phrasing above, “the needs of humans for water” — it’s like the report was written by extraterrestrials.)

The brave test subjects.
They took a number of different types of bottles and cans, filled with different liquids, and put them in various positions relative to Ground Zero for two nuclear tests (“Shot I” and “Shot II” in the report, probably “Apple I” and “Apple II” of Teapot). The closest ones were less than a quarter mile away from the first test — a mere 1056 feet. The furthest ones out were about 2 miles away.
The results were somewhat interesting. Even the bottles pretty near the test had a fairly high survival rate — if they didn’t fall off the shelves, or have something else smash into them (a “missile” problem), or get totally crushed by whatever they were being housed in, they had a good chance of not breaking. Not super surprising, in a way: bottles are small, and there’s a lot of stuff in between them and the shockwave to dissipate it. (Bottles seem more fragile than human beings, but in certain respects they are probably easier to keep safe. Also, human beings are rarely in refrigerators, Indiana Jones notwithstanding.)

Fallen soldiers.
As for radiation, only the bottles closest to Ground Zero had much radioactivity, and even that was “well within the permissible limits for emergency use,” which is to say, it won’t hurt you in the short term. The liquid itself was somewhat shielded by the bottles of the containers which picked up some of the radioactivity.
But there were, of course, still pressing questions to be resolved… how did it taste?

Examination made immediately upon recovery showed no observable gross changes in the appearance of the beverages. Immediate taste tests indicated that the beverages, both beer and soft drinks, were still of commercial quality, although there was evidence of a slight flavor change

So the Wild Turkey will be okay too?