Did Barack Obama Really Admit That Political Islam Is The Problem? 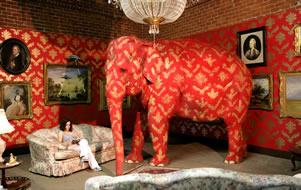 Yes, it seems he did.

On 60 Minutes last night, the President characterized the death of an ambassador, the sacking of a consulate, the storming of three embassies, and the burning of countless American flags as mere"bumps in the road" in the Middle East.

The President's remark is noteworthy not merely because he uses a euphemism for inconvenience to refer to the horrifying situation he partially bears responsibility for, but because he identified a shocking root cause for the problem:

But I was pretty certain and continue to be pretty certain that there are going to be bumps in the road because — you know, in a lot of these places — the one organizing principle — has been Islam.

Hmmmm....Did the mask slip off BHO? He was off teleprompter.

Maybe Obama read THIS in the Associated Press:

Banners were displayed in English, denouncing the film and called on the U.S. to hang the filmmaker. One told President Barack Obama "we are all with Osama," referring to Osama bin Laden, the al-Qaida leader who was killed in a U.S. raid in Pakistan in May 2011.