Some Saudi women turn to each other for sexual gratification

(BM).RIYADH: In a man’s world of domination and hegemony, some women in Saudi Arabia are turning to each other between the sheets in order to feel sexually gratified. A group of young university-age women in the ultra-conservative Gulf country, all married, told Bikyamasr.com that their husbands are rarely around and have found love in the arms of their female friends.

“Our husbands are always traveling, going to Southeast Asia and other countries so we know what is going on with them and when they come back they abuse us, so we have kind of fallen in love with each other,” Sumaiya, a 23-year-old mother of a two-year-old little boy, told Bikyamasr.com in her upscale Riyadh flat.

She says that her “girlfriend,” also married and 24-year-old Razan will come around almost daily. They both blush as they give a few details of how their relationship began. “We both just started venting to each other about how horrible our husbands are and how they mistreat us,” began Razan.

“After our friendship grew over the past few years, we began to watch movies together and have a few drinks while we did so.” They said one evening, with their children at Sumaira’s parents’ home, the two decided to watch a pornographic film together. They didn’t really know what to expect, they said.

“We were just watching and the first scene we saw were two women having sex. They looked so into each other. That’s when it happened,” Razan admitted, turning her head slightly away in apparent embarrassment.

The two said that they decided to emulate the women on the film, stripping naked and indulging in each other. It was a spur of the moment act, they both admitted, but since then have been having sexual escapades together. 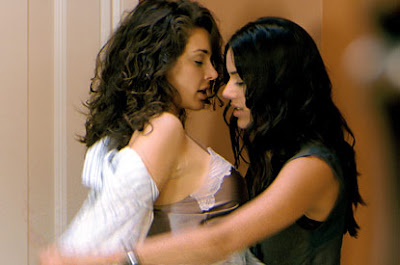 “Just having someone who cares about each other, our bodies and what we want is loving enough. I couldn’t imagine living here and being treated the way I do without her,” Razan said, gripping her lover’s hand.

Wait. Could you repeat that, but more slowly.

Enter a private chat room and get the rest of the story at The Other News.
Posted by Pastorius at 2:42:00 pm

Like I've said before, we should STEAL THEIR WOMEN:

No wonder these guys are insecure loons.

They cannot look at women unless they are dressed in garbage bags with airholes, and when they get home to look for their own woman they find her in the sack with her sister in law.

GOD IS A COMEDIAN

This blog is likely to set off another jihad as protests erupt in the street.

I hope they pick the Embassies where we have Marines this time.

Wouldn't that just be awful if we hurt some of the wittle bittie Muslim's feelings.