The Toll of Apologies - NYT:America’s Inevitable Retreat From the Middle East 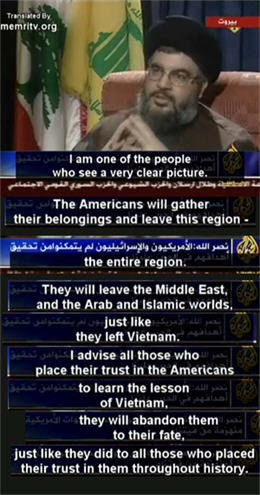 The murder of four Americans in Libya and mob assaults on the United States’ embassies across the Muslim world this month have
reminded many of 1979, when radical Islamists seized the American mission in Tehran. There, too, extremists running wild after the fall of a pro-American tyrant had found a cheap way of empowering themselves.

But the obsession with radical Islam misses a more meaningful analogy for the current state of siege in the Middle East and Afghanistan: the helicopters hovering above the roof of the American Embassy in Saigon in 1975 as North Vietnamese tanks rolled into the city.
That hasty departure ended America’s long and costly involvement in Indochina, which, like the Middle East today, the United States had inherited from defunct European empires. Of course, Southeast Asia had no natural resources to tempt the United States and no ally like Israel to defend. But it appeared to be at the front line of the worldwide battle against Communism, and American policy makers had unsuccessfully tried both proxy despots and military firepower to make the locals advance their strategic interests.

READ IT ALL
Obama, well past Carter and heading for Buchanan
Posted by Epaminondas at 12:30:00 pm