Some people think the video does not look real. The bicep on the right arm does look strange. One commenter claims the video is computer-generated.

The body, as seen in the video, had been hanging there for a number of days, as I understand it.

So, here is a before-death photo (early on in the Crucifixion process), and then you can compare this photo to what happens to an obviously normal looking human body, after it has been crucified and left to hang for a few days. 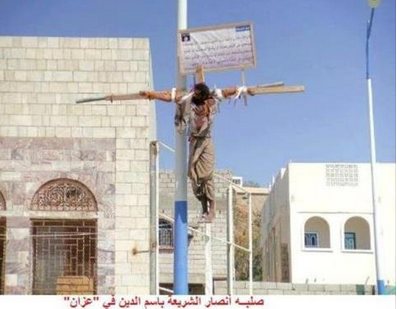 In my opinion, the above photo removes all doubt.

It is normal to not want to believe what we are seeing when we look into the face of extreme evil.

This natural aversion to belief in extreme evil was one of the mechanisms which caused us to allow the Holocaust to happen.

Let us not do this with the Holocaust that the Muslims of the world want to commit against the Christians and Jews of this age.

Shocking evidence has emerged from the Mideast about an escalation in the persecution of Christians in Muslim countries. According to a report in Lebanon Today, at least one man was crucified and two others were otherwise executed by the jihadist group Ansar al-Shariah that had taken control of a region in Yemen and imposed Islamic religious law, known as shariah. The jihadists accused the trio of being agents or spies for the United States and killed them several months ago during a period when the Yemeni government was challenged by riots and rebellion. The MEMRI website has photographs of the jihadists’ victims .
A caption to a video of a victim of crucifixion explained that he was an accused “spy who was executed by extremists for placing sensors in militant’s cars to direct U.S. attacks on them.”
A report issued to subscribers only by the MEMRI website showed a photograph of the victim crucified on an electric pylon in south Yemen’s Abyan province.

More on the crucifixion from Will at The Other News:

Memri Exclusive - Man Crucified by Al-Qaeda in Yemen - Viewer Discretion Advised.Source: Memri.
Updated -  The following report is a complimentary offering from MEMRI's Jihad and Terrorism Threat Monitor (JTTM). MEMRI offers an additional option for jihad and terrorism news – the Global Jihad News (GJN)website. Access is by annual subscription – now available at a special price of $260; to subscribe, visit the MEMRI E-Store and use the discount code SUMMER 2012 at checkout.

On August 27, 2012, a member of the leading jihadi forum Shumoukh Al-Islam posted a YouTube link to a video showing a man accused of spying for the U.S. by placing chips to direct drones targeting terrorists being crucified on an electric pylon in Abyan province in south of Yemen. A sign placed above the man's head shows the group's flag and verse 5:33 of the Koran, which reads: "The recompense of those who wage war against Allah and His Messenger and do mischief in the land is only that they shall be killed or crucified or their hands and their feet be cut off from opposite sides, or be exiled from the land. That is their disgrace in this world, and a great torment is theirs in the Hereafter."
Despite being uploaded on February 22, 2012, it appears that the video has been made available recently as suggested by the low number of views and the recently made comments. Based on the date of the video, it is safe to say that the crucified man is Saleh Ahmed Saleh Al-Jamely who was executed on February 12, 2012 after being convicted by a court managed by Al-Qaeda-affiliated Ansar Al-Shari'a. Al-Jamely was accused of spying and placing two chips in two cars that were later targeted by U.S. drones. According to a statement issued by the Islamic court of Waqqar Emirate in Abyan Governorate, dated February 10, 2012, in that attack, ten members of Ansar Al-Shari'a were killed. The other two men, Hassan Naji Hassan Al-Naqeeb - accused of recruiting, delivering chips, and paying spies; and Ramzi Muhammad Qaid Al-Ariqi - accused of spying for the Saudi intelligence by taking photographs of several buildings, were executed in public, but not crucified. 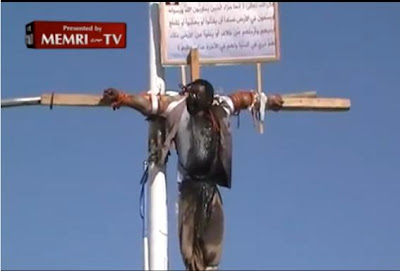 Know The Peace of Islam

Umm, that video is computer generated... Best to remove now so as not to look the fool.

Why do you say that?

Right bicep does not look real, however, my question would be ..HOW LONG HAS THE BODY ALLEGEDLY BEEN HANGING THERE? Clearly, if it is real, there is evidence of bacterial action, decomposition and swelling of the body.

I'd say this is up in the air, but original sources should be able to validate. Can we get to them?

Hi Apasto.
I posted about this before (End of August).
As you will notice there's a difference in the two pictures in my post, (Time elapsed) between the two pics ?

I got this from Spero News. Here is some info about the editor

Spero News editor Martin Barillas is a former US diplomat, who also worked as a democracy advocate and election observer in Latin America. He is also a freelance translator.

THAT IS MOST DEFINITELY REAL. THE GIANT BLISTER ON THE ARM IS NORMAL DECOMPOSITION. WHEN IT RUPTURES, COVER YOUR NOSE.

The post seems to be out of MEMRI which would be a powerful argument that it is authentic, but I cannot find this on their site

for those of you who have not seen a dead body inperson once you are dead some hours later the bodily fluids escape through any opening such as the anus, mouth and nose in the western society medical personell close these cavaties with cotton wool. As the deceased has been left in the heat decomposition will accelerate hence the swollen parts of the body. The black substance below are parts of the body waste products