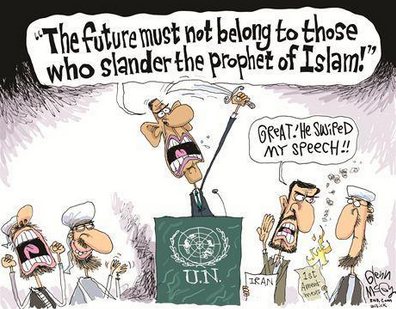 "Incoming" - UK signs agreement on “religious freedom” with OIC.(SEC).Concerns have been raised by the National Secular Society that the UK’s stance on free speech could be compromised by an agreement signed at the United Nations between this country and the Organisation of Islamic Co-operation (OIC). The Memorandum of Understanding (MoU) was signed by Baroness Sayeeda Warsi – the new “Minister for Faith” – and pledges that the UK and the OIC will “work together on issues of peace, stability and religious freedom.” At present, the OIC is agitating at the United Nations for a global blasphemy law that would make criticising or satirising religion a punishable offence. Terry Sanderson, president of the National Secular Society, said: “We are all for co-operation between nations to try to foster peace and understanding, but the concept of ‘religious freedom’ is one that the OIC has distorted to mean restrictions on free expression.

Baroness Warsi’s other remit – as well as being ‘Minister for Faith’ – is at the Foreign Office and includes being the lead minister responsible for Pakistan, Afghanistan, Bangladesh, Central Asia, the UN, the International Criminal Court and the OIC, which is the largest multi-lateral organisation in the world after the UN. She became the first British minister to speak at the OIC’s conference in June 2011 in Astana, Kazakstan. Previously she had hosted the secretary-general of the OIC in London and visited its secretariat in Jeddah, while she was in Saudi Arabia for performing Hajj. This led to the appointment of Britain’s first special representative to the organisation and its 57 members. Baroness Warsi has visited Pakistan five times during the past two and a half years in government, a country which was so central to the formation of the Islamic Conference. In the landmark agreement there is a particular emphasis on promoting the “key role Muslims have played in shaping modern Britain” and encouraging Muslim communities to play a key role at all levels in public life. Lady Warsi said: “When I addressed the OIC Conference in Kazakhstan in June 2011, I said we face the global challenges together.
This agreement formalises that, establishing our many, many areas of co-operation, from security to conflict prevention; from religious freedom to human rights. One of the central aims of my new role will be to strengthen this relationship further and I am looking forward to ensuring we continue to work closely to achieve our mutual goals.” She also praised the Framework Co-operation Agreement, signed with the OIC’s secretary-general, for its focus on promoting inter-religious understanding and interfaith dialogue, especially as these are two vital areas in the senior minister’s new governmental role. Terry Sanderson commented: “There is certainly a need for some kind of inter-religious understanding among OIC member states, a number of which suppress Christianity and other religions in a brutal and merciless fashion. “The blasphemy law which is being proposed by the OIC on behalf of its members would be an entirely dangerous and regressive step if it were to be approved at the UN. It is quite clear that it would be used to persecute and oppress non-Muslim minorities in Muslim-majority countries, as the domestic blasphemy law in Pakistan does at present. Mr Sanderson continued: “In Egypt the blasphemy laws are also used to get rid of political opponents and are sometimes used as a means of revenge by neighbours or colleagues who are in dispute. We do not need this kind of primitive legislation in our democracies and we need reassurance from our Government that their resolve remains unaffected by the signing of this agreement with the OIC.”Read the full story here.