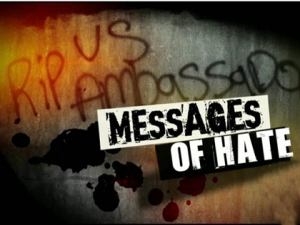 And CBS goes about obscuring what the message of "hate" was, making dark references to "rising war."

CBS, in true leftist-message mode, will agree with anything extremist Muslims say, as long as it hurts America.

Far be it from CBS to defend the idea that America's Ambassadors ought not be murdered.

NEW YORK (CBSNewYork) — A message of hate was spray-painted on a Suffolk County mosque and now police are searching for the vandals.

The angry words on the Bay Shore mosque threatened a rising war. It’s believed that someone came over the fence and vandalized the building, police said.

A pair of spray-painted statements that were written apparently referred to the overseas violence against U.S. embassies and consulates by Muslim extremists. They appeared along with an ominous reference to rising war, but the messages were directed against neighbors worshiping peacefully.
Police called it a hate crime.

“This is an attack on the community here in Suffolk County. It tears at the fabric of our community,” said Suffolk County Police Lt. Stephen Hernandez.

The overseas violence was condemned repeatedly from the pulpit at the Long Island mosque and the U.S. Libyan ambassador was mourned the very day he died.

So the words especially hurt and the worshipers said they are worried it might not be an isolated incident.

“There are things happening all over the country. It is troubling to see this happening in America. The America that I love so much,” said worshiper Mohammed Zainul.

The hurtful graffiti was painted last week. Friday morning someone came in the other side of the property to drape toilet paper over the imam’s house. Members of the mosque said they believe the actions are part of a pattern.

“I feel scared they might hurt my brothers and all that,” worshiper Mohammed Laiqat said. “I’m definitely worried about this.”

Is that how a person speaks when they are the victim of a hate crime?

I'm really afraid, and stuff. I fear for, like, the safety of my family and junk.

CAIR is a Hate Crime against America.
Posted by Pastorius at 2:37:00 pm

"RIP US ambassador" spray painted on a mosque??? Don't let the bastards fool you! This is NOT a message any Christian, Jew or atheist hurt or offended by the savages would have written.

They did it themselves to be able to cry wolf. Same as with the cars vandalized outside the jihadist Falls Church mosque.

It's all part of Shariah deceit.