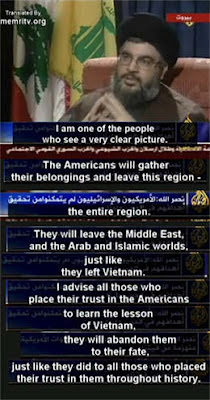 We are engaged in "Saigon in slow motion," as Tammy Swofford opined in Pakistan's Daily Times on August 18, 2012, well before the filmifada.

A taste of the essay:


It is pleasant to consider that the Pentagon remembers the lessons of the past, those learned in Vietnam. It is where the US military first put a ‘win hearts and minds’ paradigm into play. Vietnam was the initial military laboratory for a two-pronged foreign engagement for a regional conflict that sought to beat back communism whilst also making our policies palatable within a distinct cultural setting.

Military planners have also sought the same in Afghanistan...

As we wind down in Afghanistan, there will not be a defining ‘win’, rather a lot of spin. This may not be Saigon. But it is Saigon in slow motion for the families receiving back their dead, killed in such manner as meted out in Afghanistan.

Consider the following video, which aired on September 23, 2012 (Apologies for the commercial that may appear at the beginning):


Visit NBCNews.com for breaking news, world news, and news about the economy
[source]
Has American involvement in Islamic countries become the double-edged sword? Stay, we lose? Leave, we lose?
Posted by Always On Watch at 10:28:00 am

What an excellent post, and column (and look where it appeared!).

You get the attention you need in order to win the hearts and minds of the nation you are in militarily when that nation is FLAT ON ITS BACK AND WITHOUT THAT MILITARY THEY WOULD ALL STARVE TO DEATH.

If you are not willing to create that condition set, you have no business trying to occupy a conquered territory.

The problem of the USA is that we want to make war civilized so that the ethics of the most academically critical, and the ethics of so called lofty minders among us are not offended.

This is an impossible task. War is cruelty and nothing but, said someone well acquainted not only with war, but victory. HE also warned that all attempts to make war easy and safe must end in disaster and humiliation.

We now have disaster, and humiliation will quickly follow.

We need to learn and understand the why's of this. They have nothing to do with Afghanistan or it's people. They have to do with us.

I do not advocate this, I OBSERVE this.

Given this, we should stay home and just launch missiles which devastate, lay waste to the infrastructure of targets and put another steak on the fire.

If we are ready to respond to a situation such as more american being killed at work than were killed at Pearl Harbor (a signal which resulted in tens of millions killed by the USA), then the world should know that the response will be virtually no survivors in Kabul, Qandahar, etc.

When the devastation is significant enough that the tribes, families, and nation targeted cannot BEGIN to imagine how they will make it through the next winter, perhaps we can interest them in the FRAMEWORK of the system which wreaked such havoc on their way of life. If not, then they are free to fend for themselves, and we leave a big sign on the rubble,
"PLEASE DON'T MAKE US COME BACK"

This is not how I like it or want it. This is how IT IS.

We already know how to win hearts and minds.

We have just lost the courage of our convictions.

Pasto,
About Japan, you might want to look at THIS COMMENT made by a historian and retired Marine.

I do not use the term "historian" lightly!

As for the American South, well, I'm living in it. It ain't perfect, you know. But, overall, much improved in most respects.

Tammy has her own web sites as well:

She has also written an excellent novel, Arsenal. I highly recommend it.

I am proud to count Tammy as a personal friend -- and as a nurse who has given me invaluable advice for caring for Mr. AOW. If all goes as planned, Tammy will be coming here to the AOW household for a visit!

Japan has been peaceful, cooperative, and tremendously productive for going on 70 years now.

I have read others make the argument Mustang makes and they have, thus far, failed to persuade me.

We did FORCE our vision on Germany and the American South.

Apparently, Mustang would deny that.

Slavery and Nazism is not Democracy, even if it was voted in by a Democratic process.

When we use the term Democracy in the Western World, we do not mean mob rule. We mean a Republic where people vote on their representatives, and have a say in the process of law, and are protected by a Constitution which state commonly accepted Human Rights.

If Mustang wants to argue this with me, I'd like to see him do so.

I have yet to see anyone who has been able to base an argument against my assertions in real historical fact.

And besides, I HAVE NEVER SAID THAT ALL WE HAVE TO DO IS GO IN AND TELL PEOPLE HOW TO LIVE AND THINGS WILL GET BETTER.

It is a process which took a hundred years in the American South and it took about 10 years in Germany after the war.

Pastorius,
I don't think that Mustang is saying exactly what you thought. You might ask him to explain.

Why should I care?

He is just another well-educated person who seems to have forgotten our history.

I really feel we should just refer all arguments like this to Epa.

I'm sure that Mustang has not forgotten our history.

I'll see if I can reach him.

I do not mean that he has literally forgotten our history.

Mustang says, in effect, that we did not bring Democracy to Japan.

But Japan is, indeed, a Democracy. No longer do they think their Emperor is a Sun God. In fact, such a silly notion is far from the mind's of this eminently practical people.

If they do not live Freedom the same way as we do, because their culture has created a different breed of human being, that does not mean they are not fundamentally a Democracy.

Likewise, the Philippines is a Democracy. Unlike Japan, they are not Parliamentary, but are modeled more strictly on our system.

Their system is rife with corruption, and this is a blight for them, impedes their progress, and causes Filipinos to be somewhat unrealistic, kind of like Liberal Corruption causes Barack Obama and his educated minions to be unrealistic. Banana REpublics do share similar qualities after all.

But my jokes notwithstanding, I think it is wholly unfair to say that japan and the Philippines are not Democracies or that we did not vastly improve their systems.

Palestine, now that I agree with. They are a Democracy in name only. In reality they are a fascist dictatorship based on the Koran.