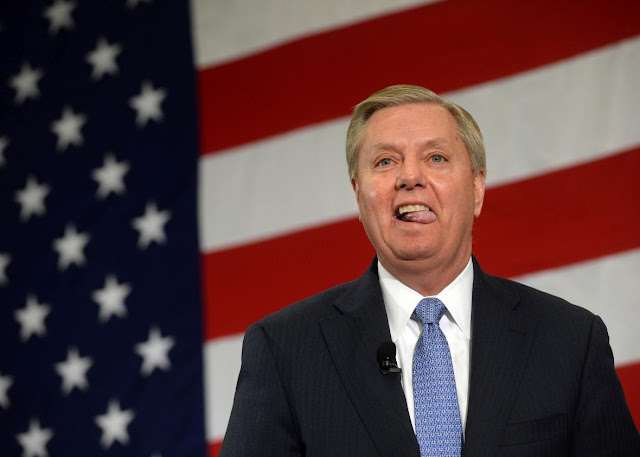 Because The GOP Is So Ineffectual,
Lindsey Graham Is Allowed To
Pull Out His Penis In Girl's Bathrooms

In a radio interview with John Catsimatidis, the former presidential candidate explained his reasoning for backing Texas Sen. Ted Cruz, someone he has butted heads with in the past.

“I’m supporting Cruz because I think he is a reliable conservative; I think the election will be much more competitive with Ted Cruz,” he said.

“The people of New York voted overwhelmingly for Donald Trump in the Republican primary — I respect that.

“I have never been more worried about the Republican Party breaking apart than I am today.” Graham said the silver lining of Trump’s rise is that it means people are tired of “big-government liberalism.”

And please note this from the linked article:

Graham then suggested the GOP elect “an alternative that’s common sense,” one who could defeat Democratic presidential candidate Hillary Clinton.

Paging Ted Cruz. Paging Ted Cruz. Kindly refer to the linked quote from Lindsey Graham which reveals you are playing nothing more than a convenient spoiler for the RNC/GOP whose desire for another as yet unnamed (GOP/RNC approved) alternative candidate for 2016 POTUS.
Posted by Pastorius at 2:13:00 pm

He then suggested the GOP elect “an alternative that’s common sense,” one who could defeat Democratic presidential candidate Hillary Clinton.
Paging Ted Cruz. Paging Ted Cruz. Kindly refer to the linked quote from Lindsey Graham which reveals you are playing nothing more than a convenient spoiler for the RNC/GOP whose desire for another as yet unnamed (GOP/RNC approved) alternative candidate for 2016 POTUS.

Thanks for pointing that out. I hadn't thought about the implication, though I did suspect it.

"...common sense...one who could defeat Hillary"

Now just who the hell would that be?

Not a big Trump fan myself - and may just vote for the Libertarian ticket in November - but tell me who has a better chance of beating Hillary than Trump?

I don't see it. Only Trump could possibly sway enough Dems to vote Republican. Anybody have another idea? I'd like to know.

Trump is the ONLY candidate that can beat Hillary and not only that but provide an alternative to the Dem handout machine for some years to come.

You may want to vote Libertarian because you don't like Trump but realistically that is going to just be a vote against Trump and for the Dems.

This election may very well prove to be the last election that Americans have a chance at keeping their country from becoming Europe.

I always hear this thing that Trump can't beat Hillary. It seems obvious to me that Trump is drawing voters from both sides of the aisle and he is the ONLY one who could beat Hillary.

In the past couple of days, two things have happened that WILL MAKE EVEN MORE LIBERALS LIKE TRUMP;

2) Kruz and Casich have joined forces.

WHAT THIS DOES IS DRIVE HOM THE CONVICTION WHICH EXISTS IN SO MANY PEOPLES MINDS - IF THEY FEEL BETRAYED BY THEIR PARTIES (ON THE LEFT OR RIGHT) THAT THERE IS A COLLUSION BETWEEN THOSE WHO ARE ON THE INSIDE - AND THAT THERE IS VERY LITTLE DISTINCTION BETWEEN THE GOP AND THE DEMS.

This conviction is exactly what has driven me to Trump.

I have come to believe my party must be destroyed because they collude with the Dems. I figure the scummy Dems will be with us always. I need a party that will, once again, represent my interests. Therefore, I will vote Trump because I want the GOP to disappear.

Cruz has gone from "Trump will not be the nominee" to all sorts of machinations to prevent Trump's nominations.