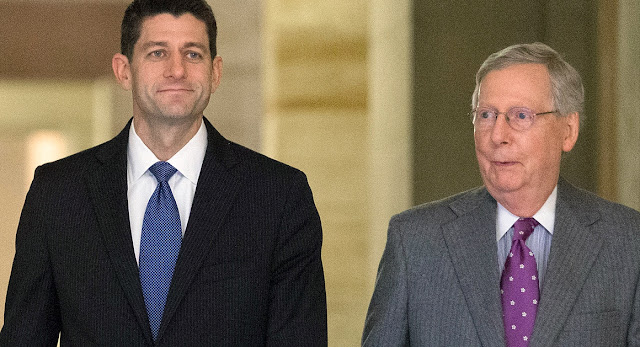 This is not the first Obamination the GOP has caved into. This is just one in a very long series of acquiescences that, in their totality, must be called AGREEMENT.

The GOP is a clear and present threat to the nation, and must be destroyed.

From the Conservative Review:


Many are asking what Republicans plan to do to stop Obama’s executive war on culture and religious liberty in pursuit of cultural Marxism. Now we know that not only will this party do nothing to stop Obama, it will use its control of Congress to codify Obama’s agenda into law. Late Wednesday night, Republicans allowed a vote on an amendment from Rep. Sean Maloney, D-N.Y., which codified Obama’s executive order 13672 making transgenderism the law of the land.

Obama’s executive order, promulgated in July 2014, instructed bureaucrats to sever contracts with companies that don’t follow the Obama-mandated sexual identity agenda. This could include companies that don’t allow men into women's bathrooms in their private corporate offices.

The amendment passed 223-195 with 43 Republicans supporting it. The GOP House just supported arguably the most radical Democrat agenda item in the dead of night.

Defenders of House leaders will contend that leadership had to allow this amendment to come to the floor. After all, they promised an open amendment process and they just couldn’t stop all the RINOs in the conference from voting with Democrats.

This argument is weak on many counts:

1) GOP leaders are forever blocking key conservative initiatives and legislation in order to violate the GOP platform; certainly they can block an anti-religious liberty transgendered amendment from Democrats to protect the integrity of the GOP-controlled House. Could you imagine Democrats allowing an amendment to pass on an issue that violates their very essence while they are in control of the chamber?

2) GOP leaders are always twisting arms to get conservative members to vote for bad bills. Somehow we are to believe they were impotent in ensuring “moderate” members (what is moderate about transgenderism?) adhere to the party’s platform?

3) The reality is that Paul Ryan has long been a supporter of ENDA (Employment Non Discrimination Act), the legislative vehicle for enshrining transgenderism into law and mandating adherence to its dogma on private businesses. That is why he’s been absent in this fight. Moreover, Republicans have failed to allow a single anti-religious bigotry bill to the floor since the illegal gay marriage decision was issued by the Supreme Court, despite the ubiquitous threats against private businesses, states, and private property. Clearly, whipping against this vote was not a priority.

Once the Maloney amendment passed with GOP votes, Republicans proceeded to do what they always do so well. They offered side-by-side amendments in an attempt to cover up the damage. They passed the “Pitts amendment” as a second-degree by voice vote to affirm the constitutional importance of religious liberty. Then they passed the Byrne Amendments to reaffirm that RFRA is still in place and the government cannot discriminate against religious individuals.

Well, as we all know, the Constitution and RFRA (Religious Freedom Restoration Act) have been in place for the entire Obama administration, yet he is still able to get away with religious bigotry edicts by claiming they don’t interfere with religious beliefs.

Enshrining Obama’s specific edict into law and then passing vanity language reaffirming the general importance of religious liberty is like doing CPR on a dead body.

To begin with, this entire spending bill was something that should never have come to the floor. It increased spending and retained a number of green energy programs for a department that shouldn’t even exist.

The sad reality is that Republicans will wind up passing a continuing resolution or an omnibus in September and will jettison even the few good provisions they secured in these individual spending bills. As such, the only remaining purpose of spending weeks passing these bills (that will go in the garbage anyway) is to draw a sharp contrast with Democrats on important issues in the news and drive a wedge between the Left and the voters.

Now that they are using this process for just the opposite purpose – to codify the most pernicious agenda of the left – why not abort this wasteful process anyway? Why not focus on slam dunk winning legislation if they are not going to use the power of the purse?

Now that leadership has loaded this already sub-par spending bill with transgenderism, conservatives should vote against final passage on Thursday. It’s bad enough that a Republican House cannot be used as a tool to go on offense against cultural Marxism and anti-religious-liberty initiatives. To pass a bill placing an exclamation mark on that agenda is unforgivable.