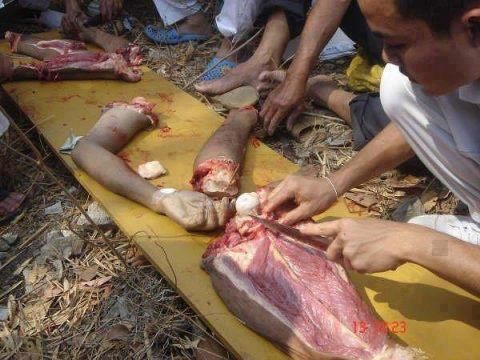 It does. And it isn't permitted under any circumstance as far as I can remember.

BUT a religion where everything is permissible if its in the name of Allah and most of its followers are brain dead pieces of turd, it really doesn't matter what their religion permits or forbids.

With that said, without any background to this story, I'm skeptical.

islam is as islam does always "bismillah"

Nico,
Do you remember this story?

Pasto, I do. But my understanding is that these stories are not related.

Besides what that guy in the BBC story did is still explicitly forbidden in Islam. However, my point is that it doesn't matter whether its forbidden in the text or not as long as its done in the name of Allah.

Funny enough, this practice of biting into the heart or liver of your enemy comes from Arabic culture that goes back to the time of Mohammed and it was Mohammed's enemies that did that to his uncle or some commander of his army.

Its to "strike fear" into the heart of the enemy. This is the reason I advocate "barbaric" attacks and humiliation against Muslims who carry out or plan to carry out attacks against the West, this is the only language they understand.

So I'm sure this picture has a context, may be what the story purports, may be something else entirely. May even be photoshopped.

Not saying you're misreporting anything, just saying I'm skeptical.

I'm somewhat skeptical too. But it's something a Muslim WOULD do.

I also advocate barbarism against Muslims. There is a reason Vlad Tepes is on our masthead.