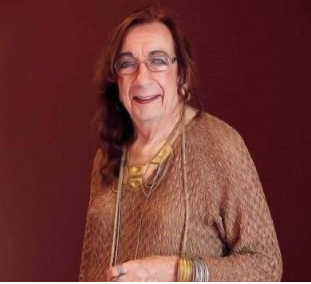 I saw this story (with this photo accompanying it) the other day, and I did not post on it, because I thought it was an over-the-top joke.

I should have known it was true, because the Obama Administration is, itself, an over-the-top joke.

A very, very dark joke, yes. But a joke, nonetheless.


The Obama administration has appointed a transgender individual to the President’s Advisory Council on Faith-based Neighborhood Partnerships, selecting Barbara Satin for a post along with two representatives of minority faiths.

Satin, who was born a man but identifies as a woman, is an Air Force veteran, a member of the United Church of Christ and currently works with the National Gay and Lesbian Task Force, according to CBN News.

“Given the current political climate, I believe it’s important that a voice of faith representing the transgender and gender non-conforming community — as well as a person of my years, nearly 82 — be present and heard in these vital conversations,” Satin said in a statement published through the United Church of Christ.

BTW what is the undoubted and observable PROCLIVITY, even political MANDATE to ensure literal exceptional, abnormal, out of the expected, bound to upset ANY or MOST EVERY GROUP selections to the exact position guaranteed to create divisions?

Merit hardly EVER has anything to do with these decisions, & we all sense it.

This is not a Muslim who became a catholic, or a Jew who became a Buddhist with a family of mixed religions, this is someone who is the subject of both executive mandate of blackmail and coercion to PUSH such a person in to the opposite sex's (by DNA) bathroom and locker rooms violating the modesty of any who object, AND the subject of LEGISLATIVELY passed law, making that act ILLEGAL.

Barack Obama had other suitable, and far better choices especially for a position which is SUITED to bring us together, but that is PRECISELY what the president of the USA apparently WANTS TO PREVENT.

We have a rabbi who is gay. She never mentions it UNLESS YOU ASK, any more than a PERSON would announce 'I HAVE SEX WITH WIMMIN'. This is what makes her normal. Those who brandish their EXCEPTIONAL (SELF IDENTIFIED) condition as professional exceptions are perfectly unsuited to serve in an position.

Except in an NAACP, or ADL of 'other identified'

Hey. What do Muslims think about this?

The tops of tall buildings are there for just such people in the minds of quranic freaks.

Looks like Walter Matthau in drag...about an hour after he died.

Anonymous,
Your description is perfect.

To answers Epa's question: I have no idea what to call this syndrome Obama suffers from. Although I suspect it is called Resentment. He picks the person who is most likely to offend all the people the person is supposed to be serving.

Pasto,
He picks the person who is most likely to offend all the people the person is supposed to be serving.

Some kind of rage, then.

Forgetting 'who' or 'what' the 'current-occupant-of-the-oval-office' installed in that position...WTF business is it for the federal government to involve itself - nay, 'lord over' 'neighborhood' or 'faith-based' political offices of any kind? This is unconstitutional on its face.
WTF is Congress?

From which I quote:

Al-Haj said that the joint operations room was set up so that the French, US and Saudi intelligence agents can directly command Jeish al-Fatah terrorist attacks in Aleppo and nearby regions.

So, the current-occupant-of-the-oval-office is in the terror attack business? Is anyone in Congress awake and paying attention???

you are right. It is nonsense, and it is unConstitutional.

However, it was George Bush who started this mess, with his faith-based initiatives.

This is a way for government to destroy Churches and strengthen socialist bullshit and Islam.

Transgenders are idol worshippers. Not sure how we can share faith.