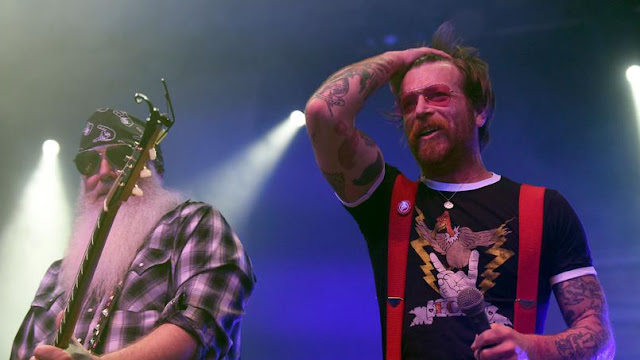 
In a brief communique, the Parisian [music] festival as well as the Cabaret Vert and Rock en Seine decided jointly to cancel the shows of the American group.

Due to the recent political statements made by the leader of the group, Jesse Hughes.

"In complete disagreement with the recent statements made by Jesse Hughes.... the fesivals Cabaret Vert et Rock en Seine decided today to cancel the concerts of the group which were planned this summer."

The message is clear. The American group had draw the thunder of many organizers after the singer Jesse Hughes had made the conspiracy-theory and racist claims in regard to the attacks of 13 November. May 14th,

Jesse Hughes responded to questions of the very conservative Taki's Magazine. An interview in which he reaffirmed his claims made last march on Fox Business in which he accused the personnel of Bataclan of complicity with the terrorists.

If he recognized having had "huge problems for having said that the Bataclan security was in cahoots with the terrorists," he remains persuaded "that they were there earlier in the day. I remember one of them staring at one of my buddies. I had just take it for Arab jealousy."

To this was added claims even more doubtful about the Muslim community. The statements which had not at all pleased the orgaizers of the festivals Rock en Seine and Cabaret Vert, the only two to have scheduled The Eagles of Death Metal this summer.

The Captain Of Flight MS804 Is A Muslim Linked To Major Muslim Terrorist Involved In Killing Americans In Benghazi.

May 20th Aviation Herald report (scroll down to "Data Available" to see messages indicate fire on board):
On May 20th 2016 The Aviation Herald received information from three independent channels, that ACARS (Aircraft Communications Addressing and Reporting System) messages with following content were received from the aircraft:

From the NBC report re ACARS: “An “FCU” refers to a unit in cockpit the pilot uses to input instructions into the flight computer. “SEC3” refers to the computer that controls the spoilers and elevator computers of the plane. The fault messages indicate there could have been problems with the plane’s controls and computers, critical to controlling the aircraft.”

There is also speculation that the dive, 360 degree turn and plunge was probably large sections of the aircraft that could be seen by radar.