Breaking: Internal Explosion on EgyptAir Flight 804 – Graffiti on Plane said: “We Will Bring Down this Plane” 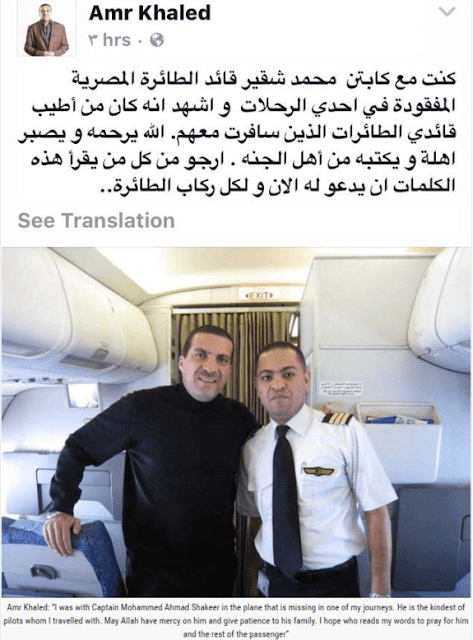 
It was reported last week in ‘the Telegraph’ that Captain Mohammed Shakir (Shakeer), was “a cheerful and religious man who would pray on board and help others find the direction of Mecca using the flight’s navigation equipment.”

Flight 804 Captain Mecca Flight 804 plunged 30,000 feet with smoke reported in the cockpit and indications that a bomb went off internally causing the rapid descent. The explosion indicated the windows in the cockpit may have been blown out.

The Telegraph reported: Data from the final moments before EgyptAir flight MS804 crashed into the Mediterranean suggest an “internal explosion” tore through the right side of the aircraft, a pilot said last night.

Investigators trying to determine whether the A320 was brought down by terrorism or a technical fault are poring over a series of warnings indicating smoke filled the cabin shortly before it disappeared from radar.

French authorities confirmed that smoke detectors went off aboard the flight a few minutes before it crashed but said it was not clear what caused the smoke or fire.

A commercial pilot with a major European airline told The Telegraph that other parts of the data log suggested that windows in the right side of the cockpit were blown out by an explosion inside the aircraft.

A photo was released recently released showing Shakeer with Amr Khaled, a well-known Muslim Brotherhood operative and an active Jihadi. Khaled posted a picture of himself with Captain Shakeer on an airplane and stated:

“May Allah have mercy on him and give patience to his family. I hope who reads my words to pray for him and the rest of the passenger[s].”

In a dark premonition of things to come, it has emerged that the crashed aircraft had once been daubed with graffiti by vandals who wrote:

“We will bring this plane down”.

The New York Times reported that the vandalism was done two years ago and was a protest against Abdel Fattah El-Sisi, the Egyptian president who seized power in a coup, rather than a jihadist threat.

The airline went on to fire a number of staff with alleged Muslim Brotherhood sympathies in 2013 as part of a general purge of suspected Islamists after the military takeover.

And in the weeks following the Paris attacks in November, French police said Arabic graffiti such as “Allahu Akbar” (God is great) were found daubed on EasyJet and Vueling planes at Charles de Gaulle airport in Paris and at Lyon airport.

The police played down any link with the attacks, although they acknowledged that such graffiti had been found on a number of planes in the months before the terror strikes.

The discoveries raised fears that a bomb could be planted on a plane at an airport in France, but EasyJet and the French authorities insisted at the time there was nothing to worry about.

Since the fuel tanks are in the wings, and the manifest shows no explosives in the cargo hold ....

This issue suddenly becomes .. hs ISIS or AQ or AN or the MB found a way to get an undetectable explosive onto an aircraft, because IF SO, and my job was to blow up people and spread terror, I would try with all my ability to do this to as many aircraft as I could reach BEFORE the black box is found and confirms an internal explosion.

And THAT'S WHY - no one is taking credit

Interesting comment to consider from a poster at FreeRepublic: EgyptAir flight MS803 from Cairo to Paris, and the return flight MS804 from Paris to Cairo, used a Boeing 737-800 for every single flight except one. That one flight was the Egypt Air flight MS804 on May 18 that went down. An Airbus A320 was substituted for the regular Boeing 737.

Did someone plant a bomb on the A320, then "caused" some sort of malfunction that required the A320 to be substituted for the scheduled jet?


Here is FlightAware's information for flight MS803, and you can see that all previous flights were with the B737, and two subsequent scheduled flights are with a B737, but the doomed flight used an A320. https://flightaware.com/live/flight/MSR803

There are multiple conflicting reports regarding EgyptAir Flight 804's demise and recovery efforts that one begins to suspect the Egyptians are running the clock on the black boxes. For instance:
via AP
"The head of Egypt's state-run provider of air navigation services, Ehab Azmy told The Associated Press that the plane did not swerve or lose altitude before it disappeared off radar, challenging an earlier account by Greece's defense minister.

Azmy, head of the National Air Navigation Services Company, said that in the minutes before the plane disappeared it was flying at its normal altitude of 37,000 feet, according to the radar reading. "That fact degrades what the Greeks are saying about the aircraft suddenly losing altitude before it vanished from radar," he added.

"There was no turning to the right or left, and it was fine when it entered Egypt's FIR (flight information region), which took nearly a minute or two before it disappeared," Azmy said.

According to Greece's defense minister Panos Kammenos the plane swerved wildly and dropped to 10,000 feet before it fell off radar.

Greek civil aviation authorities said all appeared fine with the flight until air traffic controllers were to hand it over to their Egyptian counterparts. The pilot did not respond to their calls, and then the plane vanished from radars.

It was not immediately possible to explain the discrepancy between the Greek and Egyptian accounts of the air disaster.

Egypt, which is sending a submarine to search for the flight recorders, has also refuted earlier reports alleging that search crews had found the plane's black boxes - which could offer vital clues to what happened in the final minutes of the flight."
*****
NBC: EgyptAir: Aviation Chief Says We're Still 'Far Away' From Finding Fuselage