The Australian Rock and the Muslim Hard Place 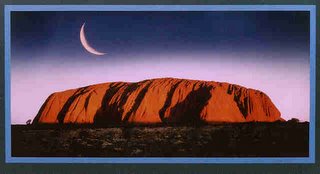 Police in Australia raided several homes and uncovered a cache of weapons.

They allegedly discovered a payload of weapons including smoke grenades, an ammunition re-loading machine, a pistol, knives, arrows and a slingshot, both in a house safe and in Sanders' brown Ford, which bore the sticker "Anglo-Saxon and proud".

Sounds very similar to what happened in France last week. In fact Australia and France have a lot in common recently.

But wait, there's more. Australian "white supremacists" have taken a page from the Islamist Propaganda Handbook and posted at least two videos "glorifying the Cronulla riots."

The first of at least two videos, entitled The Battle for Cronulla, was posted on the white nationalist website Stormfront on the first night the rioting erupted at the beachside suburb. This video has already been downloaded 1700 times.

A second video, labelled 'Cronulla Oi!, was posted on Saturday and had been downloaded about 400 times by yesterday afternoon. The overtly racist videos encourage violence against non-whites and warn any other ethnic group to stay out of Cronulla.

The Battle for Cronulla is presented by "White Nationalist TV". After featuring skinheads in German iron crosses and three-bladed swastikas, it closes with the message: "Not white, not welcome in Cronulla".

The second video is set to a song about race war by heavy metal band Screwdriver and features a montage of images showing white rioters bashing helpless victims. It also features an image of a police officer trying to rescue a victim, emblazoned with the words: "Race traitor".

Not quite up to Islamist snuff-film standards, but I'm sure that these guys, at least in their own minds, are just getting started. No doubt the media and Cate Blanchett will hold this tight to their bossom as a prime example of widespread Aussie racism. It's convenient and easy and they are busy people, after all. But, reality has a way of biting back.

There are no doubt "white racists" down under, but, as an explanation of what's going on, it's almost quaintly absurd. ...

[T]he eagerness of the Aussie and British and Canadian and European media, week in, week out, to attribute each outbreak of an apparently universal phenomenon to strictly local factors is starting to look pathological. "Violence and racism are bad", but so is self-delusion.

Self-delusion, indeed. The unwillingness or inability of a political order to address the consequences of Muslim immigration leads to radical movements.

If people who are angry and anxious have no choice among existing political parties they will find an outlet somewhere else. If professional, moderate parties are seen as sell-out or cowards likeminded people will find another way to express their political beliefs.

Stormfront hosts an anti-Muslim propaganda video? There's gambling in the saloon? None of this is surprising. It's not the handful of white supremacists the govenment should be concerned with. It the growth of a nationalist / rightist movement fueld by popular outrage in Australia. This, not a few hicks with a fetish for Nazi kitsch, presents the government with a serious dilemma: crackdown or co-opt. Either response involves real risks.

If they don't have a legitimate political party the rightists will go underground and organize in secret. They could assassinate leftist or Islamist politicians or start a campaign of arson attacks against mosques. ...
If the governments allow rightists to contest elections they risk losing votes and polarizing the electorate and further radicalizing the Muslim population. And allowing the rightists into mainstream political discourse is no guarantee that underground groups will not commit assassinations or other criminal acts.

The sad part is that most ethnic Australians are not extremists. But the dynamic currently at work pushes people toward extremes. As events unfold and pressure increases, it becomes increasingly difficult to stay in the middle. Polarizing times tend to, well, polarize.

The government walks straight into the nationalist political trap every time it is seen protecting mosques while churches burn. This provides a propaganda victory to thos who claim the government is betraying their culture and they must take action outside the law. On the other hand, the government faces the same dilemma with Muslims, who, though a smaller demographic, have a more impressive history of terrorism and mass violence than any white supremacists. And of course further violence or a terror attack in Australia will increase the native backlash, which creates better footage for propaganda videos, which movitates people to further violence, etc.

Point being, no government can simultaneously appease both extremes or the large number of their passive supporters. The government and society in general cannot calm the nationalist's anxieties without cracking down on Lebanese crime and anti-social behavior. However, any crackdown will be seen as intolerant and anti-Muslim. The government faces nothing but bad choices and risk on all sides.

Neither the growing nationalist movement nor the Muslims can be bought off or co-opted. This is a zero-sum game. Welcome, Australia, to the clash of civilizations.
Posted by Oscar in Kansas at 4:19:00 pm

From the link "a cache of weapons":

The anti-nazi spokesman said, "They're angry, disturbed, lonely and potentially violent people." I wonder how long it will take until they're no longer "lonely", and what the consequences will be then? I suspect the distress has spread farther from the fringes than the multicultralists want to admit.