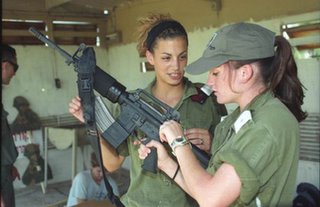 Zionist
Babes
Posted by Pastorius at 5:50:00 am

(Photos by a guy in the reserves-- also some other interesting photos--his series on a roadblock are especially interesting...)

I know. I must have some Jewish blood in my ancestry. I wonder if they'll accept me.

Oh Yeah! Bring it on!

Thank you. Great way to start the day. Maybe this could be a regular thing.

My greatgrandfather was Jewish, do I qualify for emigration to Israel?

Conde,
I don't know. We gotta check into this. Lord have mercy.

Perhaps we should be more "pc" and more "multicultural". Why limit it to Israel? We could choose from beautiful female soldiers from anti-jihadi armies around the world-- perhaps have "The Jihad-Busters Hottie of the Month"? Or: "The Infidel Cutie of the Week"?

OT for Mr Trotter: Good move claiming blog on Technorati-- that should probably help bring it to peoples' attention via their searches for tags listed for blog. Btw, I recently discovered this: http://nomoresocialism.blogspot.com/2005/11/anti-pc-league.html
If you display their "Anti PC" button, (displaying their blogroll is optional) and let them know you've done it, your blog url will be displayed on members pages. I just found out about that, seems like a good idea...?

I like the idea. I hope the women among us don't get too angry. Maybe we ought to have them post soldiers of the month, or something.

We need to get some women writing for us here.

Always on Watch, Eyesallaround, you are invited. Atlas, Atlas, wherever you are.

Anyway, let's not make it a monthly thing. I can't wait that long. It has to be at least weekly.

Several times a week would be much better.

Atlas Shrugs is one of my favorite blogs! Should we invite her to join IBA?

I correspond with her occasionally. I'll bring it up to her.

I shamelessly stole the image. With credit, of course.

Good. It needs to be seen by everybody. Not only are those two women very beautiful, but it says something about Israel's society as well, doesn't it?

Only a few countries have ever had women elected as leaders, and Israel is one of them.

I think that is a measure of the level of their civilization.