Democracy Must Be Imposed On The Middle East 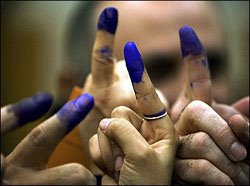 
People often cringe when you assert that values must be imposed. They mistakenly think of a Jerry Fallwell or Pat Robertson telling them what to do in their own bedroom. On the contrary, there are simply behaviors which cannot be allowed in a viable social order. Burning a widow to death in a suttee ritual is forbidden regardless of the passion of one’s belief in this gruesome and long established practice.

Democracy must be imposed on the Middle East. This is nonnegotiable if we wish to save the world from utter destruction. An attitude of live and let live is not appropriate in this situation.

If nothing else, 9/11 pushed us into this new direction. It was reason alone to liberate Iraq. The weapons of mass destruction and other issues are of secondary importance. Bernard Lewis has often warned of the rage of the Muslim world.

Some 400-500 years ago, its leaders decided to turn their back on scientific advances and the overall modern project. The West soon started to dominate in about every conceivable category. The supposed children of allah, especially Arab males, saw their power disappear.

By the the 19th Century, Muslims could only dream of the halcyon days of long gone era. This turned into outrage and bitterness sometime in the mid 1950s. Since Muslims were suppose to reign supreme---it was obvious that they were cheated. The Jews and their Christian infidel cohorts had stabbed them in the back and stolen their natural birthright.

Considering their premises, what other conclusion could they reach?

How exactly does imposing Democracy on the Middle east make us safer?

If imposing Democracy on Palestine bestows legitimate power on Hamas is that a good thing?

If imposing Democracy on Egypt enables the Muslim Brotherhood to make policy will that make the Middle East a safer place?

Is a Hezbollah controlled Lebanese government in the best interests of the US?

Wouldn't you rather have Musharraf's finger on Pakistan's Nuclear button than a freely elected popular Islamist?

What is the Jewish nation of Israel going to do when Muslims become the largest voting block?

Warlords are setting in the Afghanistan Parliament today because of imposed Democracy....is that how we define Victory in Afghanistan?

We overthrew a secular dictator in Iraq and handed power, the power to control voter's minds, over to a couple of Shiite Clerics. Is that what we had in mind when our troops headed north out Kuwait 3 years ago?

Putting the control of a government in its citizen's hands is only a good idea when the majority of those citizens are not religiously brainwashed idiots that vote however their Cleric tells them to.

Some people say that Iran is not a Democracy, and they have a point in that even though I think Ahmadinejad legitimately won a fair popular vote, and honestly reflect the Persian's cultural values, the list of candidate was vetted by the Guardian Council, But the worst thing that could happen for the US right now would be for Iran to become truly Democratic. Does a Nuclear armed Democratic Iran scare the hell out of you any less than a Nuclear armed theocracy. Could the US or Israel justify attacking a fellow Democracy...no, we would never find any support for that, but dictators...its always open season on Dictators.

Most middle easterners associate Democracy with prosperity, and due to their non-productive cultural values, and in the case of Afghanistan lack of natural resources, they are going to be disappointed with Democracy as it will fail to produce a middle class there compared to how it worked in more productive cultures such as Western or Oriental societies. Capitalist Democracy while it may be the perfect form of government for our cultural values, may not in fact be the best form of government for the Islamic world. There are cultural reasons why they have not achieved Democracy on their own, and those same reasons might make Democracy unsustainable in the absence of our firepower and financial aid. Maybe there is a good reason why they have historically been ruled by an oppressive dictator....maybe thats what they deserve.

Maybe, if we can artificially sustain our imposed Democracy on the Arab world long enough for several election cycles to reveal to themselves that voting for the most anti-American Islamist on the ticket accomplishes nothing they will wizen up and vote in a more secular slate of candidates, but with the Nuclear genie finding its way into their culture that is unworthy of wielding it as a deterrent....I don't think we are going to have enough time to find out.

Yes, I understand your point. I don't feel like going into detail, but my idea for how we should prosecute the war is completely different than the road we are taking. I think we should do what we did in WWII; that is, beat them, and beat them, and beat them some more, until they ask us to stop, and then, we should hit them with something so scary that they would never want to fight us again.

And then, in the aftermath, we should be as cruel to their ideologies, as we have been to their militaries, and their political regimes. We should refuse to allow the preacing of Jihad, of the subjugation of women, of death to the infidel, of death to the Jew, etc.

That's what we did in Japan and Nazi Germany. We completely remade their political system.

That's what we did in the early United States as well. We completely remade the world.

I totally concur, and wish you were in charge.

Amen to that, Redneck Texan!

Pastorius - My thoughts exactly. Somewhere along the way we have developed this idea that we act at war with governments, not with people. In WW2 no one said that we are against the Nazi Party but we support the oppressed German people. We pulverized Germany: factories, railroads, airfields. We bombed their cities into rubble and then shelled the rubble.

We bombed Japan until the calorie count of the populace was reduced. The Japanese were destitute. We arrived with chocolate and shoes and a Constitution. Look where they are today.

Going after strictly military targets removes the horror of war from the average person so that when the war is over they are unimpressed and unawed.

The whole idea of "swift decapitation" of enemies regimes is deeply flawed. I follow the Sherman schools. War should be a slow brutal grind that demoralizes the citizen populace so badly that they cannot even immagine opposing the victors.

The Iraq War was well-intentioned but war cannot and should not be made humane. This has been an interlude during the history of warfare. The next war will not be so nice.

Thomas the Wraith,
Yes, well put. I forgot to include the American Civil War in my comment.

In my opinion, there have been three overwheminly effective wars in American history,

In all three of those wars, we scared the hell out of the populace, and then, we utterly destroyed them,

Just as human nature does not change, neither do the rules of war. We are foolish to think we can do war by new means.

We are more than likely going to pay for our foolishness. And, once we have paid for it, then we will revert to old-school war.

The sad thing is, if what I think is going to happen, happens, the whole world is going to change before America finally gets serious.

All that being said, my opinion is, George Bush is attempting something that takes great big huge freakin' balls, especially againg the opposition he is receiving. I support him.

I want the Iraqi Democracy to succeed. There is some chance that it will. I'm going to wait and see.

I'm not going to join the chorus of Bush naysayers.