More On The Australian Riots 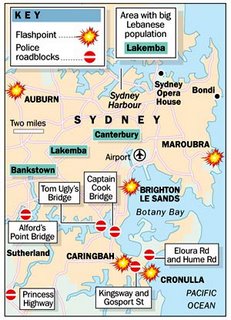 News of Eurabia has an important post up about the riots in Australia. Here's an excerpt:


A CHURCH HALL was set ablaze and shots were fired near a primary school in Sydney yesterday, fuelling fears of an escalation in violence between ethnic Arabs and whites.

Hundreds of officers were sent to potential trouble spots after Sunday’s race riots on a beach popular with white Australians and men of Arab descent. Gangs of Lebanese men retaliated by rampaging through suburban streets and attacking cars and buildings.

Go read the rest at News of Eurabia.