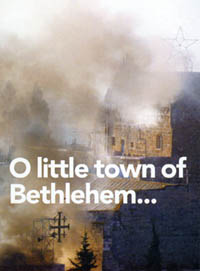 The population of Bethlehem used to be over 90% Christian. Now, it 35% Christian and 65% Muslim.

The media often tries to blame Israel. Here's a quote from the New York Times, for instance:


In the town where Christians believe Christ was born, the Christians are leaving. Four years of violence, an economic free fall and the Israeli separation barrier have all contributed to the hardships facing Palestinian Christians in Bethlehem, one of the largest concentrations of Christians in the region.


But if it is Israel's fault, why is it that the Muslim population continues to surge? Why is it that Christians leave, while Muslims stay and procreate?

Well, WND asked a Christian leader from Bethlehem. Here's what he had to say:


"All this talk about Israel driving Christians out and causing pain is nonsense," a Bethlehem Christian community leader told WND. "You want to know what is at play here, just come throughout the year and see the intimidation from the Muslims. They have burned down our stores, built mosques in front of our churches, stole our real estate and took away our rights. Women have been raped and abducted. So don't tell me about Israel. It's the Muslims."


What do you know? Someguy posted about Bethlehem today too. He recounts the story of how Hamas, who is in charge of Bethlehem, plans to institute the Jizya tax, effectively declaring all non-Muslims second-class citizens.

Then, Someguy makes a brilliant observation:

Here's a question for my readers: Does it strike you as strange that the same people who say that the joint Iraqi-Coalition effort to create a democracy will simply fail at best (if it doesn't result in something worse than Saddam's regime), are the exact same ones who say that a group of people who will not even make the effort to stop the terrorists among them from firing on a kindergarten can live in peace with Israel?

Wow, a devastating question, counselor. Or, should I say, Consigliore?

A Spade is a Spade.
A greater Palestine has corrupted the Holy Land. Vengance will be dealt. But not tonight. Happy New Year!

I've been reading about the Christians leaving Bethlehem. God knows, He is aware.

But I'm with Newc. Tonight we should feel blessed to be able to celebrate a New Year.

Remember the Christmas carol "I Heard the Bells on Christmas Day":
God is not dead, nor doth He sleep and The wrong shall fail, the right prevail. That carol was requested by one of our celebrants at our annual Christmas Eve Family Buffet, and we sang all four verses, loudly and strongly. Not a dry eye in the house!

Thanks for the link, Pastorius. :)

newc & always on watch: I agree. Which is why my last post of 2005 was on a simple Italian New Year's Celebration. If you have time, come over and check it out. :)

One more thing, Pastorius: Thanks for pasting in the quote from my post that includes the link from Smooth Stone. IMHO Smooth is among the elite in terms of both writing and fact finding, and deserves a wider readership.

Wow, someguy, thank you very much for your kind words. I hope to be able to live up to them... Thank you Pastorius for pasting in SomeGuy's excerpt. Simply, I just want the world to know that there is truth and then there is fiction. Like most of us with a conscience, we want to identify the truths. It is only logical that there is an enemy of Truth and it must be named. Thank you both SomeGuy and Pastorius for helping to spread the truth, so that all of us and all of our children, may live in peace. G-d never wanted anything less for us. His enemies, on the other hand, do not. We must identify the enemy, place him in our metaphorical crosshair, and shoot to kill.

You are a son of a bitch and it seems like you are a pimp for the jews... why do you feel so thretened by the Muslims? obviously cause you know we ARE BETTER and that we are on the right path... its easy to say shit but its never easy to say that you are the shit... accept it you piece of shit that you have nothing logical to say... why do you get so offended that the women wear hijab... if you want babes around showing their asses why dont you put up your wives, sisters and mom's naked pics up.. no one will have any objectiuon... why is it that if a Muslim wears a hijab its supression and when nuns cover themselves they are practising their religion... well its very simple coz you people are feeling completely threatened by Islam... the day of judgement will have u part of the hell fire and then we will see who will be smiling. not you for sure... coz we believe... and if you have ANY balls leve this comment on... coz very conveniently you have kept only the ones you approve!