"Palestinian" Toddler Talks Of Her Hatred For "The Jews" [video] - extract : 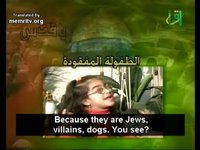 Interviewer: Why did they do that to Muhammad Al-Dura?

Interviewer: Is it possible that we will reconcile with them one day, and there will be peace between us?

Interviewer: Don't we want peace with them? 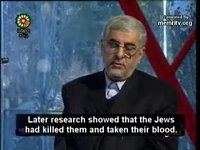 In 1883, about 150 French children were murdered in a horrible way in the suburbs of Paris, before the Jewish Passover holiday. Later research showed that the Jews had killed them and taken their blood. This event caused riots in Paris back then, and the French government found itself under pressure.

A similar incident took place in London, when many English children were killed by Jewish rabbis.
Link...

The parts of Israel controlled by Arab Muslims aren't just virulently anti-Jew. It's also a dangerous existence for Christians in this part of the world. In the land where Christ began his ministry, his flock have become numbered and live in fear.

You see, Islam is an equal opportunity ideology of intolerance and violent retribution against any doctrine that doesn't acknowledge its supremacy, and it's not about race. Arab Christians are persecuted, humiliated, and killed all across the Middle East by their Muslim brethren.
Link...

Supreme Iranian ruler Ayatollah Ali Akbar Hashemi-Rafsanjani said last Friday that the Muslim world would win a nuclear exchange with Israel, aggravating fears Tehran's quest for atomic weapons indeed has one purpose: the annihilation of what it calls the Zionist "cancer".
Link...

'Islam is the only mean for salvation of mankind with the Iranian nation as global front-runner and flag-holder of the real Islam,' Ahmadinjead said in his first-ever meeting as president with students in Teheran.
Link...

Canadian "Liberal" Politician Declares His Nomination "A Victory For Islam"

A Canadian who won the Liberal party nomination as a candidate for Parliament exclaimed, "This is a victory for Islam. Islam won." Omar Alghabra made his victory speech in a church in the province of Ontario.

One of the church members, David Ragheb, said that "a member of Parliament is supposed to represent my concerns about taxes and roads [and] not promote an Islamic agenda."
Link...

[cross posted at Justify This!]

J you are vital beacon! This stuff you highlight, contemptible though it is, should be required viewing for all students of the middle east. Too many hide under the guise of 'peace activism', whilst remaining utterly ignorant to the hateful, delusional ranting eminating from the ME.

The combination of occasional posts like this one (brief summaries of several stories) plus the regular more in-depth posts on one story is a nice combination-- makes this blog even more informative (as well as interesting).

Then, of course, readers can follow the links on those stories that they'd like to read more about.

Hey what are you worried about?

I mean what's the worse that can happen?

It's not there could be a nuclear war or anything.

I mean these guys are just playing to internal politics, right?

They're perfectly reasonable humans who are reachable with logic.

We can offer them financial incentives, right?

Maybe a week in Vegas?