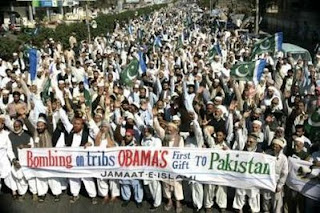 Look at that sign. Obama bombs tribs. Trib. Tribbing. His first gift to Pakistan. Bombed tribs. Tribadism. Look it up if you must.
Just what the hell is going on over there, anyway. And why is the CTR1PA getting involved in such personal matters? I'm confused.
at Dr. Bulldog:
Gates says missile attacks in Pakistan will continue
WASHINGTON (CNN) — Defense Secretary Robert Gates said missile strikes in Pakistan will continue in an effort to root out al Qaeda members.
Gates spoke to the Senate Armed Services Committee in his first comments to Congress as President Obama’s defense secretary.
In response to a question from committee Chairman Carl Levin, D-Michigan, Gates said the strikes will continue to target terrorists who have based themselves across the border from Afghanistan.
“Let me just say, both President Bush and President Obama have made clear that we will go after al Qaeda wherever al Qaeda is. And we will continue to pursue this,” Gates said.
Asked by Levin whether Pakistan is aware of this continued pursuit, Gates replied simply, “Yes,
sir.”
Seventeen people were killed Friday in two missile strikes in the ungoverned tribal area of Pakistan. A government official and two military officials said they were U.S. attacks. They were the first such strikes since Obama took office Tuesday.
The tribal region of Pakistan has seen a sharp spike in the number of aerial attacks carried out by unmanned drones.
The United States has the only military with drones operating in the area.
In 2008, there were 30 suspected U.S. missile strikes in Pakistan, based on a count by CNN in Islamabad.
Gates opened his comments with a clear message that Afghanistan is at the top of his to-do list.
In one of the clearest indications of the military planning for adding troops, Gates outlined a deployment of two brigades by spring and the third by late summer. Read Gates’ prepared testimony (PDF)
Additional troops, even if available to deploy, could not be added until later this year because it would take that much time to build out the required infrastructure in Afghanistan to support the troops, Gates explained.
END_OF_DOCUMENT_TOKEN_TO_BE_REPLACED
Posted by midnight rider at 2:52:00 pm

That's wrong and immoral of President Obama to bomb innocent lesbians while they're scissoring.

Exactly. Now, if he were taking pictures. . .