IBA Golden Balls Award: Military judge to Obama: No, I will not suspend hearings on USS Cole attacker 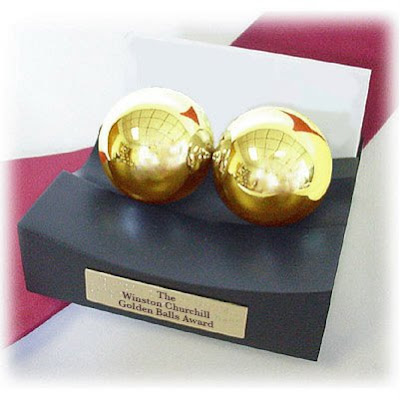 Balls with gravitational fields of their own.
From Jihad Watch:

A citizen obeys the laws as they are currently formulated: an act of defiance. "Military Judge Denies Obama Request to Suspend Hearings at Guantanamo," by Peter Finn for the Washington Post, January 29 (thanks to all who sent this in):

A military judge in Guantanamo Bay has denied the Obama administration's request to delay proceedings for 120 days in the case of a detainee accused of planning the October 2000 attack on the USS Cole warship, an al-Qaeda strike that killed 17 service members and injured 50 others.

The decision throws into some disarray the administration's plan to buy time as it reviews individual detainee cases as part of its plan to close the U.S. military prison at the Guantanamo naval base in Cuba. The Pentagon may now be forced to withdraw the charges against Abd al Rahim al-Nashiri, a Saudi citizen of Yemeni descent.

In one of its first actions, the Obama administration instructed military prosecutors to seek 120-day suspensions of legal proceedings in the cases of 21 detainees who have been charged. There are approximately 245 prisoners held at Guantanamo.

The request was quickly granted in other cases when prosecutors told military judges that a suspension was in the "interests of justice" so that the "president and his administration [can] review the military commissions process, generally, and the cases currently pending before military commissions, specifically."

"The Commission is unaware of how conducting an arraignment would preclude any option by the administration," said Pohl in a written opinion, portions of which were read to The Post. "Congress passed the military commissions act, which remains in effect. The Commission is bound by the law as it currently exists, not as it may change in the future."

Nashiri is facing arraignment on Feb. 9, and Pohl said the proceedings would go ahead....

You guys crack me up! Awesome news!!

There are three branches of government. Pres. O can only ask. He can't touch the judge.

Obama probably thinks he can touch the judge. That's the scary part.

now a swift trial and if found guilty shoot him.

The Joint Chiefs of Staff HAVE AN ABSOLUTE CONSTITUTIONAL DUTY to stand behind Guantanamo Military Judge James Pohl UNTIL OBAMA OVERCOMES “RES IPSA LOQUITUR” BY SUPPLYING HIS LONG FORM BIRTH CERTIFICATE AND PROVING HIS ELIGIBILITY TO BE PRESIDENT UNDER ARTICLE 2 OF THE US CONSTITUTION.