The Most Successful Military Campaign In American History

This from the Gateway Pundit: Before President George W. Bush leaves office it's only fitting to give credit to where credit it due. Although you would not know this from the anti-Bush media or democrats, the US military has waged the most successful major military campaign in American history these past 8 years.

The War on Terror has been an amazing success not only in what has been accomplished but in what it has cost in lives. Two brutal regimes were obliterated, Al-Qaeda was decimated, fledgling democracies were established. But, most importantly, the US was able to do this while sacrificing the fewest number of soldiers monthly than in any other military campaign in US history. In fact, the US today is losing fewer soldiers each month in Iraq and Afghanistan combined than the average number of soldiers lost monthly during the Clinton years (~35 to 78).

Here's how the War on Terror stacks up with other US Wars: 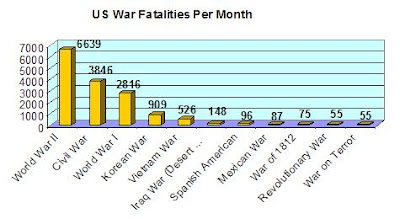 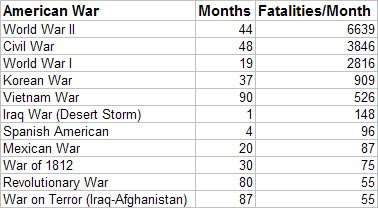 The population today in the US is much larger than when these previous wars were fought. If you factor that in it really puts things into perspective.

The US has suffered 604 fatalities in Operation Enduring Freedom in Afghanistan. The Taliban and Al-Qaeda has suffered 12,000 fatalities. 28,700 militant Islamists have been captured.

The US has suffered 4227 fatalities in Iraqi Freedom. More than 19,429 Al-Qaeda and Islamic militants have been killed. Over 18,900 insurgents have been captured.

Not only that but as Vice President Dick Cheney said this week we've achieved most of the objectives in Iraq that were established in the spring of '03:

We've got the violence level down to its lowest level since '03. We've had three national elections, a constitution written, a new government stood up, new army recruited and trained, the Iraqis increasingly able to take on responsibility for themselves. And we've now entered into a strategic framework agreement with the new Iraqi government that will provide for the ultimate withdrawal of U.S. forces.

You could not have asked for much more than that in terms of the policies that we started on in '03.

It's only fitting that this is reported before President Bush leaves office.

Obviously, you won't hear this from the liberal media.

It certainly doesn't fit their narrative that Bush's War was the worst foreign policy mistake in US history.
UPDATE: Terry Gain adds this:

1. More innocent Iraqis were being killed and dying because of sanctions when Hussein was in power than have been killed during the liberation of Iraq. The war has saved lives even as it’s being fought.

2. The vast majority of the killing of innocent Iraqis has been by the domestic insurgents and foreign terrorists. Americans have killed a small percentage of the innocents who’ve been killed.

3. The American war against Iraq ended on April 9, 2003. The war against Iraq by domestic insurgents and al Qaeda followed. That war is also largely over. The pacification of Iraq is continuing apace.

4. The pacification is also proceeding inexorably. Iraqis show every sign of keeping the gift of democracy they have received from the United States.

5. Calling for an end to the war – as have Reid and Pelosi – when it is insurgents and al Qaeda who are continuing the war is a brain -dead Democrat talking point. Even Obama understands that if the United States withdraws prematurely the hard won victory over the insurgents may be reversed.

6. Premature withdrawal will cause the war to continue, not end.

But I don’t think keeping us safe has been Bush’s most impressive achievement. That was winning the war in Iraq, and in particular, his refusal to accept defeat when so many counseled him to do so in late 2006. His ordering the surge of troops to Iraq in January 2007 was an act of personal courage and of presidential leadership. The results have benefited both Iraq and the United States. And the outcome in Iraq is a remarkable gift to the incoming president, who now only has to sustain success, rather than trying to deal with the consequences in the region and around the world of a humiliating withdrawal and a devastating defeat.

Quoting above: ==> "In fact, the US today is losing fewer soldiers each month in Iraq and Afghanistan combined than the average number of soldiers lost monthly during the Clinton years (~35 to 78)." <==

Juxtaposed against 2007 stats for
the annointed one's home turf - (the State of Illinois vs. two countries):

Why allow the left to frame the debate over what constitutes victory?

From May 5th (Wilderness) to June 15th 1864 (Petersburg) Grant had 56,000 Union killed (5 WEEKS PEOPLE), and 90,000 casualties according to James McPherson in Tried by War. The campaign was a complete success, but the democrats wanted to take us out of the war and allow the south (and slavery) to live because the casualties were so painful (and THOSE WERE). Had Sherman not taken Atlanta, perhaps they would have in winning the 1864 election.

I would suggest that success is measured by the enemies' death and broken will, NOT by our casualties.

That's not the way I like it, but that's the way it is.

Human nature IS part of nature.