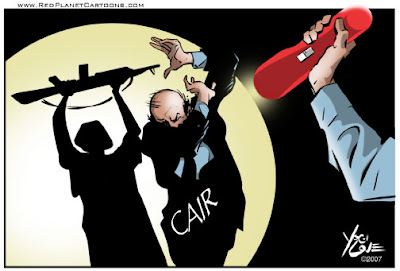 The FBI says bye bye to CAIR.
From Jihad Watch:

"FBI Cuts Off CAIR Over Hamas Questions," by Mary Jacoby for IPT News, January 29 (thanks to Jeffrey Imm):

The Federal Bureau of Investigation (FBI) has cut off contacts with the Council on American-Islamic Relations (CAIR) amid mounting concern about the Muslim advocacy group's roots in a Hamas-support network, the Investigative Project on Terrorism has learned.

The decision to end contacts with CAIR was made quietly last summer as federal prosecutors prepared for a second trial of the Holy Land Foundation for Relief and Development (HLF), an Islamic charity accused of providing money and political support to the terrorist group Hamas, according to people with knowledge of the matter.

CAIR and its chairman emeritus, Omar Ahmad, were named un-indicted co-conspirators in the HLF case. Both Ahmad and CAIR's current national executive director, Nihad Awad, were revealed on government wiretaps as having been active participants in early Hamas-related organizational meetings in the United States. During testimony, FBI agent Lara Burns described CAIR as a front organization.

Hamas is a US-designated foreign terrorist organization, and it's been illegal since 1995 to provide support to it within the United States.

The decision to end contacts with CAIR is a significant policy change for the FBI. For years, the FBI worked with the national organization and its state chapters to address Muslim community concerns about the potential for hate crimes and other civil liberty violations in the wake of the September 11, 2001 terrorist attacks.

But critics said the FBI improperly conferred legitimacy on CAIR by meeting with its officials, even as its own investigative files contained evidence of CAIR leaders' ties to Hamas.

Last autumn, FBI field offices began notifying state CAIR chapters that bureau officials could no longer meet with them until CAIR's national leadership in Washington had addressed issues raised by the HLF trial, according to people with knowledge of the notifications.

CAIR spokesman Ibrahim Hooper declined to comment Wednesday when the IPT called for comment. Before hanging up, Hooper said "We're more than happy to cooperate with legitimate media. But we don't cooperate with those who promote anti-Muslim bigotry."...

Good, maybe our government will do its job, like it should have been doing!

Damien,
But is it too little, too late?

The FBI has no official policy, nor has it issued official directives regarding CAIR. This all had to do with the Holyland trial...it's over.

Just wishful thinking on our part.