How to tell if you are right or wrong ..Saudi hails Obama's stance towards Arab world

Guess what that means?

Saudi Arabia, one of Washington's top allies in the Middle East, on Tuesday hailed new US President Barack Obama's desire to bolster ties with the Arab world.

Foreign Minister Prince Saud al-Faisal praised Obama for "his desire to have a strong and fruitful relationship with the Arab world" and said his stance was a "positive development" in Washington's policy towards the Middle East.

If Obama can do anything substantive with a word charm offensive, MORE POWER TO HIM
So why am I not buying that idea?

Prince Saud told the Saudi-funded and Dubai-based Al-Arabiya that a resolution of the Middle East conflict would "automatically contribute to the resolution of other regional crises."

"resolution of the Middle East conflict" = Islamic Peace?
Automagically help resolve other problems? Like then Jews will be sons of men and women instead of apes and pigs? We will no longer be kufr barbarians destined for hell? All KSA funded schools will sing Adon Olam every Friday, or at demonstrations? Oil will be at $25/barrel. KSA opens its bases and wallet for an attack on Iran. Jihadis will be put to death and the banks there will open their records for the New York Post. 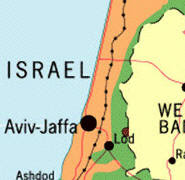 Anyone see ANY of the Al Saud kissing Livni's cheek, or shaking hands with Bibi?

He said Arab nations were ready to discuss with Obama's administration the Saudi-initiated peace plan which dates back to 2002 calling for a normalisation of ties with Israel in return for a full withdrawal from Arab land occupied in 1967.

Nine miles wide should never be allowed to happen