"This stuff is in your own books!"

It's not enough that al-Qaeda has called Fr Zakaria Botros "one of the most wanted infidels in the world," issuing a 60 million dollar bounty on his head, or that popular Arabic magazines call him "Islam's public enemy #1"; now, as expected, CAIR is getting in on the action, calling for a "national alert" -- as in umma alert, eerily reminiscent of a fatwa -- against him.

Apparently his last few shows dealing with Muhammad's questionable sexual habits, including necrophilia -- which I translated here, here, and here -- are irking CAIR, specifically as his words are "embraced by a number of bloggers and Web sites that criticize Islam."

Why do radical Muslims, such as CAIR, hate -- and fear -- Zakaria Botros so? (I first described him and his ministry on NRO; be sure to click on links that go to important video clips of him, with English subtitles, where he makes several impressive demands of Islam). The problem Muslims have with Fr Botros is that they simply cannot refute him: everything he says -- no matter how scandalizing to Islam -- is always based on, often revered, Islamic sources. Moreover, Fr Botros rarely makes any claims about Islam: he only exposes; he only raises questions and then invites Islam's ulema to respond and "clarify" the matter. However, as this story indicates, their response is only to have him censored -- or, for the more radical, killed.

As he always says, however, "This stuff is in your own books! If you don't like it, go burn your books -- you know, the way Caliph Uthman burned all the other contending Korans [there were 7] when he prepared the authoritative version, the one you believe is based on a 'heavenly' Koran!"

Anyone interested in supporting Fr Botros and his mission can do so at his website; here also.

SOUTHFIELD -- Muslims and interfaith leaders in Metro Detroit are asking a local radio station owner to discontinue broadcasts in which, they say, a Coptic priest has repeatedly defamed the Prophet Muhammad over the past year.

In an Arabic-language broadcast Wednesday on WNZK 680/690 AM, the Rev. Zakariah Boutros said the Muslim prophet Muhammad had engaged in necrophilia and gay sex, according to the Council on American Islamic Relations.

Boutros has previously come under fire from area Muslims, who say he disparages Islam. The controversial, American-based priest can be heard on purchased time slots on radio stations internationally. His words have stirred controversy in Egypt and Great Britain, and are embraced by a number of bloggers and Web sites that criticize Islam.

Amani Mostafa, who hosts the program "Questions About Faith" on which Boutros spoke Thursday, said Boutros was "reading from an Islamic text" when he said, over the air, that the Prophet Muhammad slept in the grave of a dead woman and allowed a man to kiss and caress his chest.

Hadiths are Muhammad's saying or writings, as reported by his followers.

Muslims say that no such wording appears in the Quran or the Hadiths.

"If that's their excuse, it's lame," said Dawud Walid, of CAIR, which distributed a "national alert" Thursday asking Muslims to contact the radio station to express concerns about the broadcast. CAIR also counseled Muslims to be "firm but polite. Hostile comments can and will be used to further defame Islam and Muslims."

Sima Birach, who owns the station, said he had received some complaints on Thursday, though he said he did not know how many.

In an interview with The Detroit News last summer Birach promised to end the broadcasts, upon the request of interfaith Muslim, Jewish and Christian groups in Metro Detroit.

Birach went so far as to put people associated with Boutros's broadcasts on conference calls with this reporter, while he berated them for allowing what some consider hate speech.

"It's not right," Birach said at the time. "It's not fair to use some fake or stupid books to accuse someone's religion. Do you hear me?" But on Thursday, Birach said he had since heard from "several prominent people in the community," that what Boutros stated in the broadcasts is true.

If it wasn't, there would be no Zakaria Botros, as he would've been immediately discredited as a liar and forger. That he's famous, that people listen to him, and want to kill him, all evinces that what he says is, in fact, based on Islamic scriptures and thus not open to debate -- hence the appeal and conversions on the one hand, rabid anger and hate on the other.

"Maybe we need to have more meetings," Birach said, referring to members of the Muslim and interfaith communities.

The problem with CAIR's Ummah Alert is not simply that it seems to be an overt attempt to thwart Free Speech through threat of physical intimidation, but that it is a kind of Fool's Errand for Muslims (but then, isn't all of Islam a fool's errand?).

You see, Father Zakaria Botros no longer looks like he does in these pictures. He has shaved his beard and put on a few years.

But, in an IBA exclusive report, I can tell you exactly what he looks like now, and where to find him. He now resides in the UK. And, here is a recent photograph: 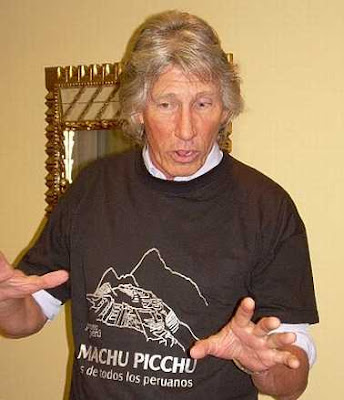 Yep, that's him, I'll testify to that. I think he's also had to change his name to Roger, yep, Roger Waters. Go get 'im Mahoudians.

"Nurse suspended for offering to pray for elderly patient's recovery

Caroline Petrie, a committed Christian, has been accused by her employers of failing to demonstrate a "personal and professional commitment to equality and diversity".

She faces disciplinary action and could lose her job over the incident.

Mrs Petrie, a married mother of two, says she has been left shocked and upset by the action taken against her.

She insists she has never forced her own religious beliefs on anyone but politely inquired if the elderly patient wanted her to pray for her – either in the woman's presence or after the nurse had left the patient's home.

"I simply couldn't believe that I have been suspended over this. I knew I hadn't done anything wrong. All I am trying to do is help my patients, many of whom want me to pray for them," she said.

So ya thought ya
Might like to go to the show
To feel the warm thrill of confusion
That space cadet glow
I got some bad news for you, Sunshine
Pink isn't well
He stayed back at the hotel
And they've sent us along as a surrogate band
We're gonna find out where you fans really stand
Are there any queers in the theatre tonight?
Get 'em up against the wall
There's one in the spotlight
Now he don't look right to me
Get him up against the wall
And that one looks Jewish
And that one's a coon
Who let all this riffraff into the room?
There's one smoking a joint
And another with spots
If I had my way
I'd have all of ya shot

Father Boutros shows the way forward. No-one can win a war by fighting defensively, which is all that we have been doing so far in response to the Islamic onslaught.

We need to take the propaganda war against this murderous Satanic cult right into the heart of Dar al-Islam.

Muslims Against Sharia congratulate The Investigative Project on making this possible!

Poll: What Should Be Done With Hamas Supporters?