Melanie Phillips, author of Londonistan, states the obvious: Obama is "aiding and abetting the enemies of the West" 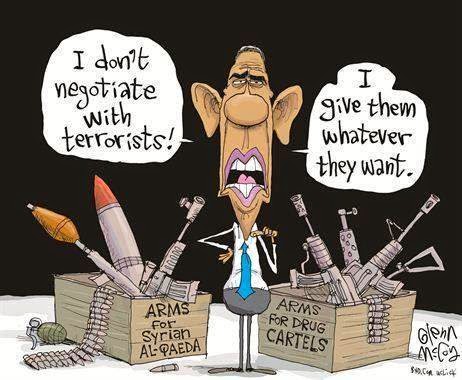 In a 40-minute interview posted Tuesday at The Blaze, Melanie Phillips, a columnist with the Times of London and a former progressive turned critic, said Barack Obama is "aiding and abetting the enemies of the West." She also accused Obama of engaging in "outright malice" against Israel while getting cozy with allies of Hamas.

"Time and again, President Obama seems not to be simply withdrawing from the global fray. That would be bad enough," she said. "But he’s actually aiding and abetting the enemies of the West."
According to Phillips, Obama is helping Iran become a strong force in the Middle East. She also told The Blaze the president is helping countries like Qatar and Turkey while aiding the Muslim Brotherhood in an effort to punish General Sisi.

This is not the first time Obama has been accused of siding with the Muslim Brotherhood. In January, retired U.S. Air Force Gen. Tom McInerney confirmed the presence of the Brotherhood in the U.S. government. In May, we reported that the administration sent the so-called "smoking gun" email indicating that Susan Rice was coached to blame the Benghazi terror attack on an obscure online video to a leader of a Muslim Brotherhood front group.

Last September, an Egyptian paper went even further, accusing Obama of being a full member of the Brotherhood. The claim has not yet been verified, but former GOP Rep. Allen West recently said "all" of the evidence indicates that Obama is an "Islamist" whose administration is "working counter to the security of the United States of America." A year ago, West said the Brotherhood had "infiltrated" the U.S. government.
Phillips also addressed the tumultuous relationship between the administration and Israel. According to Benjamin Weingarten, what Phillips said was "staggering."

"People were very shocked to find that in this row that had apparently blown up…over the Israeli government allegedly going behind the White House’s back to Congress to get authorization for more equipment [which had been perceived as a routine military-to-military transfer in Israel]," she said. "People were very shocked that as a result of that row, it would appear that Obama was basically holding up supplies at a time when Israel was under such terrible pressure and under such terrible attack."

At the same time, she noted, Obama signed what she called a "mega" arms deal with Qatar. Qatar, she added, "is on the wrong side of the battle for civilization."

"Qatar is behind Hamas…is behind Islamists," she told The Blaze. "And people are astonished and horrified that the country that they’ve taken for granted…as an ally of Israel, not only can’t be relied on…but also is suspected of acting for Israel’s enemies."

As a result of Obama's policies, she said, America has "stepped back" from its traditional role of "keeping peace in the interests of democracy and freedom." But, she explained, while America has stepped back, Obama hasn't, because the situation is now much worse. Phillips, Weingarten added, predicted radical European Islamization in her in her 2006 book, “Londonistan.”
Posted by Quill at 9:11:00 am

It's all about Obama's "vision": a new world order (fundamental change).

He may have his dream. Hitler had his dream. Each of them surrounded themselves with like-minded individuals. But most career officers in Germany were against Hitler, like I´m sure American military men are against Obama´s vision of America. It did not make any difference in Germany, and it´s obviously making no difference in this country. The bureaucracy functions on auto pilot, and when orders come from the political appointees at the top, nobody questions the orders.

My question is: given that the Executive Branch is highly flawed and working against the American people and their interests, where is the Legislative? Are they equally compromised? If they are, if they have been accepting for decades the financial largess of our enemies to fill their campaign coffers, is it not it time they burn the sails, cut the losses, and start thinking how history will look at them? At this point they are all traitors, mainly all Democrats in Congress. Not all Dems are far leftists. Where is the rest?